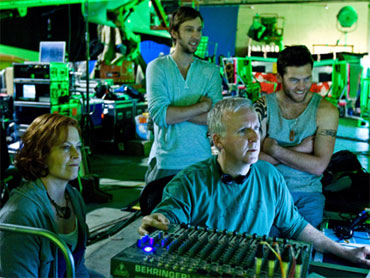 It was a memorable and merry Christmas in Hollywood as moviegoers shattered box-office records, responding in droves to a diverse array of high-profile releases over the holiday weekend.

The estimated $278 million in weekend box-office revenue broke the previous record of roughly $253 million set in July 2008, the weekend "The Dark Knight" was released.

A diverse group of films drew throngs to the multiplexes: James Cameron's "Avatar" pushed strongly into its second week while "Sherlock Holmes," "Alvin and the Chipmunks: The Squeakquel" and "It's Complicated" all opened.

"Avatar," the 3-D epic, topped them all, earning $75 million for 20th Century Fox, according to studio estimates Sunday. Remarkably, that was only a 3 percent drop from its opening weekend total of $77.4 million. (Blockbusters typically drop 30-50 percent in the second weekend.) In its 10 days of release, "Avatar" has made $212 million domestically - and could be on its way to a worldwide gross of over $1 billion.

"This thing is going to be playing and playing, I can tell you that," said Bert Livingston, 20th Century Fox distribution executive. "There's a lot of business out there. Everybody's got good movies out."

In second was "Sherlock Holmes," Guy Ritchie's reboot of the franchise with Robert Downey Jr. starring as Arthur Conan Doyle's detective. The Warner Bros. film opened with a weekend total of $65.4 million, including a record Christmas Day debut of $24.9 million.

It was a start that seemed sure to pave the way for sequels. Dan Fellman, head of distribution for Warner Bros., called the result "sensational."

Hollywood.com's Paul Dergarabedian discussed the year at the box office, and the weekend performance, on The Early Show" Monday:

"Alvin and the Chipmunks: The Squeakquel," which opened Wednesday, took in $50.2 million on the weekend and $77.1 million in its five days of release. The film, also from Fox, earned an impressive $18.8 million on Wednesday alone. The strong start suggested that "Squeakquel" was likely to surpass its 2007 original, which made $217 million.

The sparkling Christmas weekend results spelled good things for all the films in release in the coming week - one of the most lucrative of the year.

"We all know what next week means to the industry. This is ... huge," said Nikki Rocco, head of distribution for Universal. "Christmas is past us. No more shopping, no more returning. College kids are home. ... I'm so optimistic about what the next weekend holds for us."

Said Livingston: "Starting this Monday, every day is a Saturday."

"Up in the Air," which has some of the best awards momentum, grossed $11.8 million, bringing its cumulative total to $24.5 million - already nearly earning back its production budget.

"For us, this movie was always the movie that we felt was going to be a real focus during the awards season," said Rob Moore, Paramount vice chairman. "It feels like this should have a long run as awards season continues."

"Nine," the adaptation of the Broadway musical (which itself was a riff of Federico Fellini's classic film "8 1/2") earned $5.5 million in 1408 theaters.

"It's an absolutely fitting end to the biggest box office year of all time," said Paul Dergarabedian, box-office analyst for Hollywood.com. "It's just been a total roller coaster ride. It's like audience members are on board."

2009 still has several days to go, but the year is already a record for domestic ticket sales with more than $10 billion at the box office. That surpassed the $9.7 billion mark of 2007.

While some of the credit has to go the recession (movies historically do well in hard times when a trip to the movie theater is a relatively cheap form of entertainment and escapism), there was a feeling Sunday that Hollywood had put forth a better product this Christmas.

"People say it's the recession," said Dergarabedian. "It's the movies - it's really the movies. It seems like when people aren't at home, they're at the movies."

He added: "You're going to find a smile on the face of every studio chief out there today."

"There is no context," said Foster. "It's so far beyond where we've ever been. It's not eking past a record, it's shattering it."

"That's what fueled this Christmas, the diversity of the films," said Dergarabedian. "It was like a cinematic buffet line. If you can't find a movie that you like in the marketplace right now, you don't like movies."