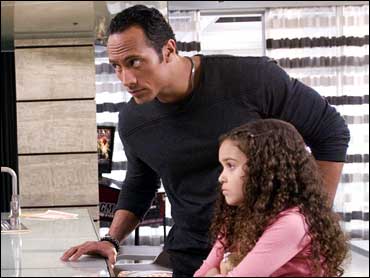 Dwayne "The Rock" Johnson had the winning game plan at the box office.

Disney's "The Game Plan," starring Johnson as a football quarterback whose bachelor lifestyle is disrupted by the arrival of a daughter he never knew he had, opened as the top weekend flick with $22.7 million, according to studio estimates Sunday.

The weekend had looked like it would be a showdown between "The Game Plan" and Universal's Middle East thriller "The Kingdom," which stars Jamie Foxx and Jennifer Garner as members of a U.S. team investigating a terrorist attack in Saudi Arabia.

Johnson was the latest action hero aiming to broaden his audience with a family film. With a PG rating, "The Game Plan" took advantage of a long dry spell for kid-friendly movies, as parents with children made up two-thirds of the audience.

"There was definitely pent-up demand for people who don't necessarily want to go to the heavy R-rated films," said Chuck Viane, head of distribution for Disney. "The entire general audience has been underserved lately."

"The Kingdom" faced heavy competition from other violent R-rated films, among them "3:10 to Yuma," "The Brave One" and "Eastern Promises." Though not an overtly political film, "The Kingdom" also had to test audience interest for action tales set against the war on terrorism.

Directed by Wes Anderson ("The Royal Tenenbaums"), the film stars Owen Wilson, Adrien Brody and Jason Schwartzman as brothers on an odyssey across India.

It was the second straight weekend that Hollywood business was down after a summer of record revenue. The top 12 movies took in $76.7 million, down 11 percent from the same weekend last year, when "Open Season" was the No. 1 movie with $23.6 million.

"What goes up must come down," said Paul Dergarabedian, president of box-office tracker Media By Numbers. "It would be really difficult to maintain three, four months of up box office, so this was kind of inevitable. It was quite a strong fall last year, so we're having a little trouble competing."