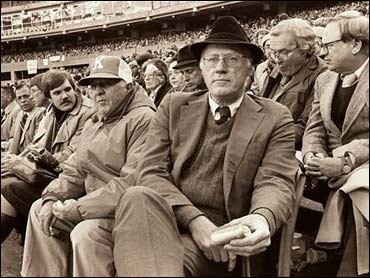 Bowie Kuhn, whose 15 tumultuous years as baseball commissioner coincided with the rise of free agency and multimillion-dollar salaries, died Thursday. He was 80.

In a statement, the current commissioner, Bud Selig, called Kuhn "a close friend, a respected leader, and an impressive figure in all ways. He led our game through a great deal of change and controversy. Yet Bowie laid the groundwork for the success we enjoy today. He brought us expansion, night World Series games, and greater national television exposure. All of baseball mourns him."

When Kuhn took over as commissioner from William Eckert on Feb. 4, 1969, baseball just had completed its final season as a tradition-bound, 20-team sport with no pre-World Series playoffs, a reserve clause and an average salary of about $19,000.

During his tenure, the sport battled the rise of the NFL and a combative players' union that attacked him with lawsuits, grievances and work stoppages.

By the time Peter Ueberroth succeeded Kuhn on Oct. 1, 1984, the major leagues had 26 teams in four divisions, a designated hitter in the American League, the first night World Series games, color-splashed uniforms, free agency and an average salary of nearly $330,000.

"I want it to be remembered that I was commissioner during a time of tremendous growth in the popularity of the game," he said, "and that it was a time in which no one could question the integrity of the game."

People did question several of his major decisions. He didn't attend the game in 1974 when Hank Aaron hit his 715th home run to break Babe Ruth's career record. And he banned Hall of Famers Willie Mays and Mickey Mantle from association with their teams because of their liaisons with gambling casinos — Mays in 1979 and Mantle in 1983.

Many fans also remember him for his questionable choice to watch World Series games played at night in frigid weather without an overcoat.

Finley once called Kuhn "the village idiot." A prim and proper lawyer who stood ramrod erect, Kuhn was thought of as a stuffed shirt by some.

"You've got to develop a sense of humor," Kuhn once said in an interview. "You have to be able to stand back and laugh. That's invaluable, or you're apt to go slightly balmy."