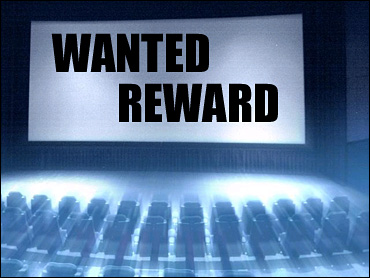 Film studios and movie theaters are offering rewards of up to $500 to theater employees who nab people using camcorders to record films.

The rewards program announced Monday is the latest in a series of efforts to stem camcording piracy, which the Motion Picture Association of America estimates costs the industry billions of dollars each year.

The MPAA seized 52 million DVDs and other illegal copies of movies in 2003, many of which began as recordings made in theaters during the first few days of a movie's opening.

Hollywood studios have already cracked down on tapings made during pre-release screenings. Studios often search bags, use metal detectors and station people with night vision goggles in theaters to catch camcorders.

Under the new program, co-sponsored by the National Association of Theater Owners, U.S., theater employees can qualify for the reward by catching camcorders, notifying the police and stopping the illegal recording.