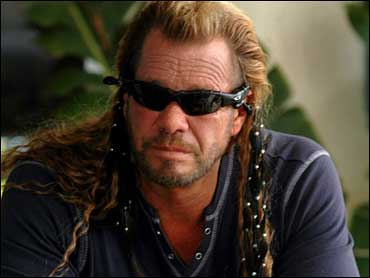 By the ShowBuzz's Caitlin Johnson

When most people think of Duane "Dog" Chapman, they think of cigarettes, large muscles, tattoos, a blonde mullet flowing in the wind as he runs to apprehend a convict.

There is a lot more to Chapman's story and it's all revealed in his candid book, "You Can Run But You Can't Hide," which reached No. 1 on the New York Times bestseller list. It is currently ranked No. 25.

The book details Chapman's troubled childhood and his reckless teenage years when he hung around with a biker gang called the Disciples. These facts may not be terribly surprising. But did you know that Chapman is half Indian? Did you know he is deeply religious and has been a devout Christian most of his life? Did you know he was convicted of murder?

The book reveals all these facts about Dog's life, including the revelation that he saw an angel at age 25 while on an airplane home after serving 18 months in jail for a murder he says he did not commit.

"That was the only one I've ever seen. I don't just walk around and poof, there's an angel, but how do you explain that?" He told The ShowBuzz.

In the book, Chapman writes that he had a conversation with a redheaded man on an airplane who urged him to have faith in God despite all the hardship he endured. Chapman was drinking during the conversation and suddenly the man disappeared. The flight attendant told him he had been talking to himself the whole time.

Whatever it was, Chapman said that that conversation helped him turn his life around. Stories like this help Chapman tell the truth about his extremely eventful life, populated by bikers, five wives and 12 children. It's his ups and downs, his experience on the wrong side of the law that makes him an effective hunter of criminals, he said, because he knows how they think.

Today, Chapman says the majority of people he goes after are drug addicts -- specifically meth addicts.

"With methamphetamine, it's not like heroin and shoot it up and nod, or cocaine where you run into the closet and freak because the cops could be coming, but methamphetamine gets you out there in the public, so that's the drug that's dangerous," he said. "You know, No. 1, it eats your body. They make this stuff out of battery acid."

Aside from his own drug use, Chapman knows first-hand the awful toll it takes on human life. He lost his own daughter Barbara Kate to the scourge of drugs. She died at age 23 in a high-speed car crash that involved drugs on the same day that Chapman married his longtime companion, Beth. So when he arrests people who are hooked on drugs, he can't help but sympathize.

"I had a guy the other day, I arrested a young man recently, and the father of to the young man said, 'You know, Dog, I love my son, but I just don't know what that drug is going to tell him to do,' " Chapman said. "And I thought, 'You know what, sir, that's exactly what is going on here."

But there is one case where the Dog had no sympathy. It was his greatest capture: Andrew Luster, who was convicted of series of rapes in 2003.

It was a difficult case for Chapman, but one he said he would willingly give his life for. He captured Luster in Mexico and in doing so violated Mexico's extradition laws. As a result he spent some time in prison. Charges against Chapman were eventually dropped, but Chapman said all the hardship he endured was worth it.

"The lowest moments of my life, I never thought -- you know I worried about making a parole ... or did my mom write me a letter that day," he said. "I did have a second chance when I was 24 years old and I take that second chance to the grave."