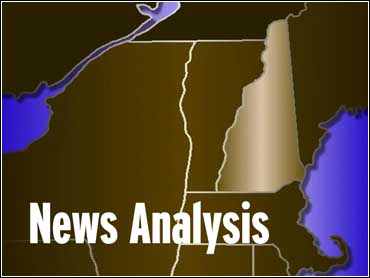 The Iowa Bounce is a fairly well documented political syndrome: A second-tier political candidate, sometimes a near unknown, does "better than expected" in the Iowa caucuses and reaps the benefits in later primaries.

But, observes CBS News.com's Washington Editorial Director Dick Meyer, The Iowa Bounce may not survive as a 21st century phenomenon. This year, the first tier candidates won, of course. If any one did "better than expected" it was Al Gore, who soared with over 60 percent support among Democrats.

Front-runners like Gore can't, by definition, bounce. But they can roll, and the vice president is steamrolling.

Maybe Steve Forbes, who finished a strong third in Iowa, got a slight Bounce. But there is a school of thought maintaining that individuals with a net worth over $25 million or more are incapable of
bouncing.

So, we turn our search for meaning in political patterns to the less-clearly diagnosed New Hampshire Trounce. In this syndrome, the front-running heavyweight gets an electoral rock thrown at his head by the Granite State, but recovers very well, thank you, and goes on to win the nomination.

It happened to Bob Dole in 1996: He did well in Iowa, but got his clock cleaned by the zany Pat Buchanan in New Hampshire. There were a few more skirmishes with Buchanan and Forbes down the road, but Bob Dole held them off and eventually won the nomination.

In 1984, new-idea-meister Gary Hart got the Iowa Bounce, big time. He bounced his way to a devastating win over heavyweight Walter Mondale in New Hampshire, who then had a ferocious race on his hands. Eventually, a clever soul came up with the famous "Where's the Beef" challenge to Hart's self-declared new ideas and he got sizzled.

The New Hampshire Trounce could survive Y2K. But it could have its own millennial bug. The front-runners both did well in Iowa and face tough races in New Hampshire. But some late tracking polls show Bush and Gore have anti-Trounce momentum going.

If the anti-Trounce materializes - an admittedly hypothetical scenario - some new and important trends may develop. The most interesting: the resurgence of the political parties in America.

One of the most important writings on American politics in recent decades was the 1972 classic The Party's Over by David Broder of The Washington Post. Broder argued that parties had become weaker because candidates no longer relied upon party bosses for campaign funds, endorsements, organization, and blessings. They raised their own dough, Broder wrote, and thus were immune from party whips and discipline while in office. Congressional leaders had no tools to force pols to vote with the party when it may not have been in the candidate's personal interest to do so.

But if both the Iowa Bounce and The New Hampshire Trounce get relegated to the ash heap of history, it may be a sign that the Party is making a comeback. Bush the Younger and Junior ore are, to a degree seen rarely in the recent era, backed with the clout, cash, and collective wisdom of their party establishments.

Gore has simply dominated Bradley in getting the votes of Democratic Superdelegates, the elected officials and party pros who are automatic delegates to the convention.

Bush has unprecedented support from Republican politicians - especially governors - who are desperate to unite behind a winner after eight years of Clinton. They kept the contributions flowing like Texas crude, and provide instant organization in many states.

The notion that 2000 would witness coronations, not campaigns has had much currency.

A subtle sign that parties may be gaining muscle tone may be the rabid reaction within party establishments to negative campaigns. Republican groups recruited Bob Dole to warn Steve Forbes not to be a deep-pockets bully, for example. Gore and Bradley get taken to task for many of their more cranky or feisty thrusts and parries, even though their most vicious attacks this year pale in comparison to attacks in years past.

It's very possible that power wielded by parties, combined with this year's famous front-loaded schedule, may bring an early end to the primary season. That would leave 24 hour news cable outfits, roving pundits, and, yes, even political Internet sites sucking air until the August conventions.

Maybe the press hopes the New Hampshire Trounce spices things up a bit, but surely the Republic could endure the deprivation.