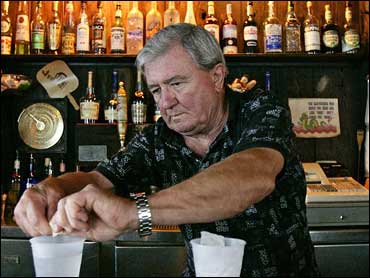 The cocktail, a staple of birthday celebrations, is having a birthday party of its own.

Alcohol experts and liquor aficionados are marking May 13 as the 200th anniversary of the cocktail in America.

Spearheaded by the Museum of the American Cocktail, parties across the United States, as well as in Europe and Australia, will honor the various delicious, and often intoxicating, cocktails of the past and present.

So how did we come to call a cocktail by its name?

The drinks museum says that on May 13, 1806, an editor for a Hudson, N.Y. newspaper defined the term for a confused and curious reader after an article the week prior included the phrase "cock tail" among a list of beverages consumed by a politician seeking office.

"Will you be so obliging as to inform me what is meant by this species of refreshment?" the reader asked. "I have heard of a forum, of phlegm-cutter and fog driver, of wetting the whistle, of moistening the clay, of a fillip, a spur in the head, quenching a spark in the throat, of flip & c, but never in my life, though have lived a good many years, did I hear of cock tail before."

The editor of The Balance and Columbian Repository confidently provided an answer.

"Cock tail, then is a stimulating liquor, composed of spirits of any kind, sugar, water and bitters it is vulgarly called a bittered sling, and is supposed to be an excellent electioneering potion inasmuch as it renders the heart stout and bold, at the same time that it fuddles the head," the editor wrote.

Technology spurred the explosion of the cocktail's popularity in the mid-1800s. Cheaper ice machines meant easier access to a key ingredient. So did the invention of small, reliable gas compressors that could fit behind bars and make bubbly mixers such as soda water.

In 1862, a bartender named Jerry Thomas published the first known book of mixed drink recipes – there were 10.

Twenty years later, barman Harry Johnson published the first guide for bartenders, advising his peers to "treat all customers with the utmost politeness and respect."

"The key to being a great bartender is to be a person who can be friendly, Dale DeGroff, the museum's president and a veteran barman informally known as the "king of cocktails," told the CBS Early Show back in 2002. "You don't have to know anything about making drinks. You just need a thick skin, a smile, and a willingness to talk. You need to understand people. It sounds easy, but it's hard."

The 19th-century editor of the Balance thought there was really one thing people needed to know about the "cock tail": the power of the drink.

"It is said also, to be of great use to a democratic candidate," the editor wrote to the reader, "because, a person having swallowed a glass of it, is ready to swallow any thing else."