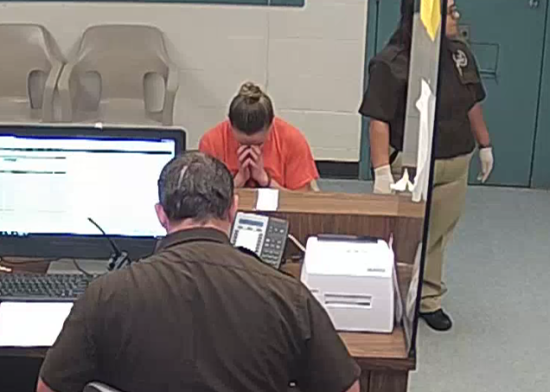 KAUFMAN, Texas – The Kaufman County Jail released video Thursday of Dallas Police Officer Amber Guyger getting booked on a manslaughter charge after turning herself in on Sunday, September 9. CBS Dallas/Fort Worth reports the booking happened three days after she fatally shot Botham Jean in his own apartment.

According to court documents, Guyger, 30, mistook his apartment for her own and thought she encountered a burglar. Guyger is out of jail on a $300,000 bond, but Dallas County District Attorney Faith Johnson is taking the case to a grand jury.

At one point in the video, Guyger leans down and puts her face in her hands before recomposing herself.

A Dallas police affidavit says officers recovered two bullet casings, a police backpack and vest and 10.4 grams of marijuana from the apartment of a man killed by an officer who said she mistook his apartment for her own. A search warrant affidavit says a lunch box, laptop computer, metal marijuana grinder, two electronic keys and two used packages of medical aid also were recovered from Jean's Dallas apartment.

Guyger says the door was "ajar" and inside noticed "the apartment interior was nearly completely dark."

"To hear that his door was open, he would never -- and have the lights off -- he would never do that," Allisa, Botham's sister, told CBS News' Omar Villafranca. "He was like me. He does not like the dark."

The family says Botham placed a red carpet in front of his door to distinguish his apartment from others.

"He made sure to let everyone know this is mine – it's my red carpet," Allisa said.

After the funeral, area religious leaders expressed their outrage at the killing. Sammie Berry, an elder and pulpit minister at Jean's church, says the family cannot rest until justice is served and Guyger is punished "to the fullest extent of the law." He described Jean's death as a tragedy that could have been avoided and said the group wants to know why Guyger has not been fired.

He says they "cannot let Bo become another statistic."