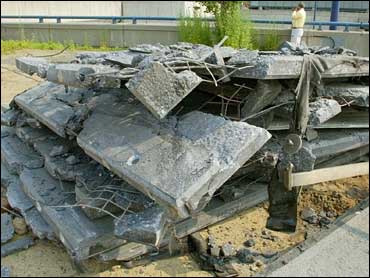 Gov. Mitt Romney said Tuesday he was taking legal action to oust the head of the Massachusetts Turnpike Authority after a woman was crushed to death by falling cement in a Boston Big Dig tunnel.

In addition, Massachusetts Attorney General Tom Reilly says he is treating the collapse as a crime scene that could lead to charges of negligent homicide.

"People should not have to drive through the Turnpike tunnels with their fingers crossed," Romney said. "Neither I nor anyone else could be or should be satisfied until we have new leadership at the Turnpike authority."

At least 12 tons of concrete fell from the ceiling of a connector tunnel late Monday, crushing a car carrying newlyweds to Logan Airport and killing the woman.

The driver of the crushed car managed to crawl through a window to safety, but his wife was killed when four of the massive concrete ceiling panels hit the vehicle.

The shutdown of the Interstate 90 connector tunnel backed up traffic for miles during the Tuesday morning commute. Authorities hoped to reopen it Wednesday, but were still removing about 30 ceiling slabs from the accident site and checking at least 17 other areas with similar "tiebacks" holding ceiling panels in place.

Massachusetts Turnpike Authority Chairman Matthew Amorello said a steel "tieback" that had held a 40-foot section of ceiling over eastbound Interstate 90 gave way, letting the concrete slabs loose as the car drove beneath them.

"There was a snapping sound heard," Amorello said. "One of the tile panels from the roof released. It caused a series of panels to be released."

The accident was near the entrance to the Ted Williams Tunnel, which runs under Boston Harbor to Logan International Airport. Amorello said he had ordered a precautionary inspection of that tunnel as well because it has similar tiebacks, though a different ceiling structure.

Amorello said similar tiebacks were also used in 17 spots on the Interstate 90 section of the Big Dig project, and all of those also were being checked.

"We feel awful about what happened last night," Amorello said. "It's an awful, awful tragedy. ... This is an awful situation that occurred."

He appointed a state police major, two outside consultants and a team from the Federal Highway Administration to assist in the investigation.

"We don't need a six-month study. We need an immediate reaction and action by the different authorities so that we can reassure the public as they drive into the city or drive over to the airport that the tunnel is safe to go through," he said.

The ceiling panels in the affected tunnel were erected in 1999. The steel tiebacks holding them were bolted to the tunnel roof overhead.

Amorello said the contractor was Modern Continental. Representatives of that company and project manager Bechtel/Parsons Brinckerhoff did not immediately respond to calls seeking comment Tuesday.

"Any responsible party will be held accountable for what happened," Amorello said. "This is an unacceptable, horrible tragedy."

The $14 billion Big Dig highway project, which buried Interstate 93 beneath downtown and extended the Massachusetts Turnpike to Logan Airport, has been criticized for construction problems and cost overruns. There have been water leaks and at least one incident when dirt and debris from an air shaft fell onto cars.

In May, prosecutors charged six current and former employees of a concrete supplier with fraud for allegedly concealing that some concrete delivered to the Big Dig was not freshly mixed.

Amorello said preliminary investigation shows that the quality of the concrete was not to blame for Monday's accident.

Christy Mihos, an independent candidate for governor and former member of the Turnpike Authority Board and agency critic, called the accident "my worst nightmare come true."

Mihos urged the governor to seize control of the Turnpike's day-to-day operations.

The victims were identified by State Police as newlyweds Milena Delvalle, 38, a native of Costa Rica, and Angel Delvalle, 46. Angel Delvalle was treated for minor injuries.

The two were headed to Logan Airport to pick up his brother and sister-in-law, who had been vacationing in his native Puerto Rico.