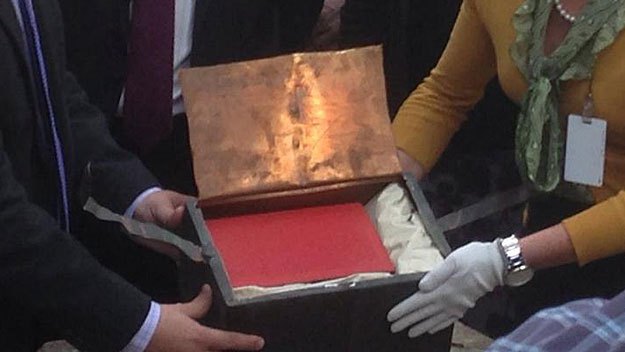 WOBURN, Mass. -- Historians who opened a small copper box that been hidden in the head of a lion statue atop a Boston building for more than a century got a small surprise: a hardcover book.

In addition to the expected papers, the Bostonian Society on Thursday found the small red book inside the box roughly the size of a modern shoebox. The book had no visible markings, and nothing was taken out of the box because of the items' fragile condition. So, the contents of the book remain a mystery.

Society President Brian LeMay said he was "absolutely delighted" by the discovery.

The time capsule has been sealed inside the lion's head since 1901. Rumors of its existence were confirmed last month when the statue was taken down from the Old State House for refurbishing.

CBS Boston reports that the process started with the careful and delicate removal of the lion's crown to gain access to the copper box that was held in place by copper wires. With white gloves on, Bob Shore with Skylight Studios removed the five to 10-pound time capsule, then used a drill and metal cutter to open the top of the box.

Inside the box, archivists found the red hardcover book surrounded by paper that appeared to be newsprint. The contents will be carefully removed and examined over the next week.

"It will come back to our archives at the Bostonian Society," archivist Elizabeth Roscio said. "I'll slowly start the process of removing things and spreading them out, getting an inventory of what's there, stabilizing the materials by putting them in acid-free folders."

The book was an unexpected find, Roscio said.

"I was expecting a pile of brittle newspapers, so this is a great surprise that it's in such good condition," she said. "It's all packed in there pretty tight."

The society first learned about the possible existence of the time capsule years ago from the great-great-granddaughter of a man who had worked on renovations to the Old State House.

A 1901 article from The Boston Globe surfaced later, alluding to contents of a copper box "which will prove interesting when the box is opened many years hence."

The box was believed to contain a variety of items including letters, newspaper clippings and political paraphernalia from the period, according to a group that operates a museum in the building.

Officials said it was unlikely any documents inside would be removed or displayed immediately on Thursday because of their fragile condition after 113 years, said Heather Leet, director of development for the Bostonian Society.

One of Boston's most popular tourist attractions, the Old State House has a storied history. It was just outside the building that British regulars opened fire on a crowd of protesters in 1770, killing five people in what would become known as the Boston Massacre.

In the summer of 1776, the newly-signed Declaration of Independence was read for the first time to Bostonians from a balcony of the building, which would later go on to serve as the first seat of Massachusetts government.

A new capsule is being donated to the Bostonian Society to put current materials inside. The society is taking suggestions for items but already it has been decided that a medal from the 2013 Boston Marathon will be included and a photo of mayor Marty Walsh.

The cooper box was not the only time capsule opened in the U.S. this week. On Wednesday, a century-old time capsule, filled mostly with documents by long-gone Wall Street businessmen celebrating New York as a commercial hub, was unsealed.

Spectators at the New-York Historical Society gathered around the mysterious bronze box as workers wearing surgical gloves removed 26 screws keeping it sealed since 1914.

The crowd leaned in when the lid came off and historian Nick Yablon reached in for the items: a collection of documents, booklets and newspapers depicting the turn-of-the-century businessmen's interests - from the tea, coffee and spice trade to other commerce, baseball and bullfights.

"This is the thrill of recovering relics," said Yablon, a professor of American studies at the University of Iowa who's writing a book about time capsules.