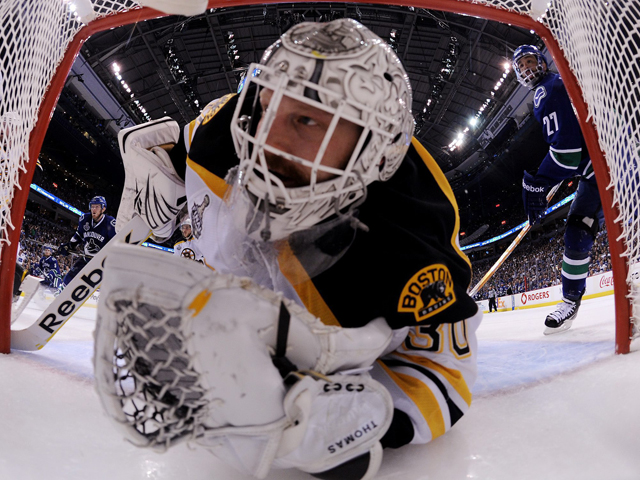 WASHINGTON - President Barack Obama saluted the NHL's Boston Bruins for their 2011 Stanley Cup championship on Monday, but one key member of the team skipped the White House visit in protest.

"I believe the federal government has grown out of control, threatening the rights, liberties, and property of the people," Goalie Tim Thomas said in a statement. The decision to stay away, Thomas said, "was not about politics or party, as in my opinion both parties are responsible for the situation we are in as a country."

Even though Thomas, winner of the Vezina Trophy as the league's top goaltender in the regular season and the playoff MVP, skipped the event, many of the Bruins made it to the White House.

The Bruins won their first Stanley Cup title in 39 years last June after a bruising seven-game final series against the Vancouver Canucks.

It was the latest in a string of Boston sports championships, including the Celtics in 2008, the Red Sox in 2007 and the New England Patriots in 2005. The Patriots play in next month's Super Bowl.

"The Bruins, the Sox, the Celtics, now the Patriots. Enough already, Boston," Obama said during a ceremony in the East Room of the White House. "What's going on, huh?"

Obama also jokingly invoked some New England slang in welcoming the Bruins, along with the Stanley Cup, to the White House.

"I know you are all wicked happy to be here," he said.

The president said there was no better image of the Bruins' dominance than when Zdeno Chara, the team's 6-foot-9 defenseman, hoisted the Stanley Cup above his head in Vancouver in celebration last spring.

"Which is, I'm sure, the highest that the Stanley Cup had ever been," he said.

Obama drew laughter from the crowd when he cited the scrappy play of Bruins forward Brad Marchand, who emerged as a star with five goals in the last five games of the finals against Vancouver.

"'The `Little Ball of Hate' shrugged off the rookie jitters," said Obama, adding "What's up with that nickname, man?"

Obama praised the teamwork of the six-time champions.

Obama praised the team for its work off the ice as well, noting the Boston Bruins Foundation has donated more than $7 million to charities in New England.

NASCAR has some cleaning and explaining to do