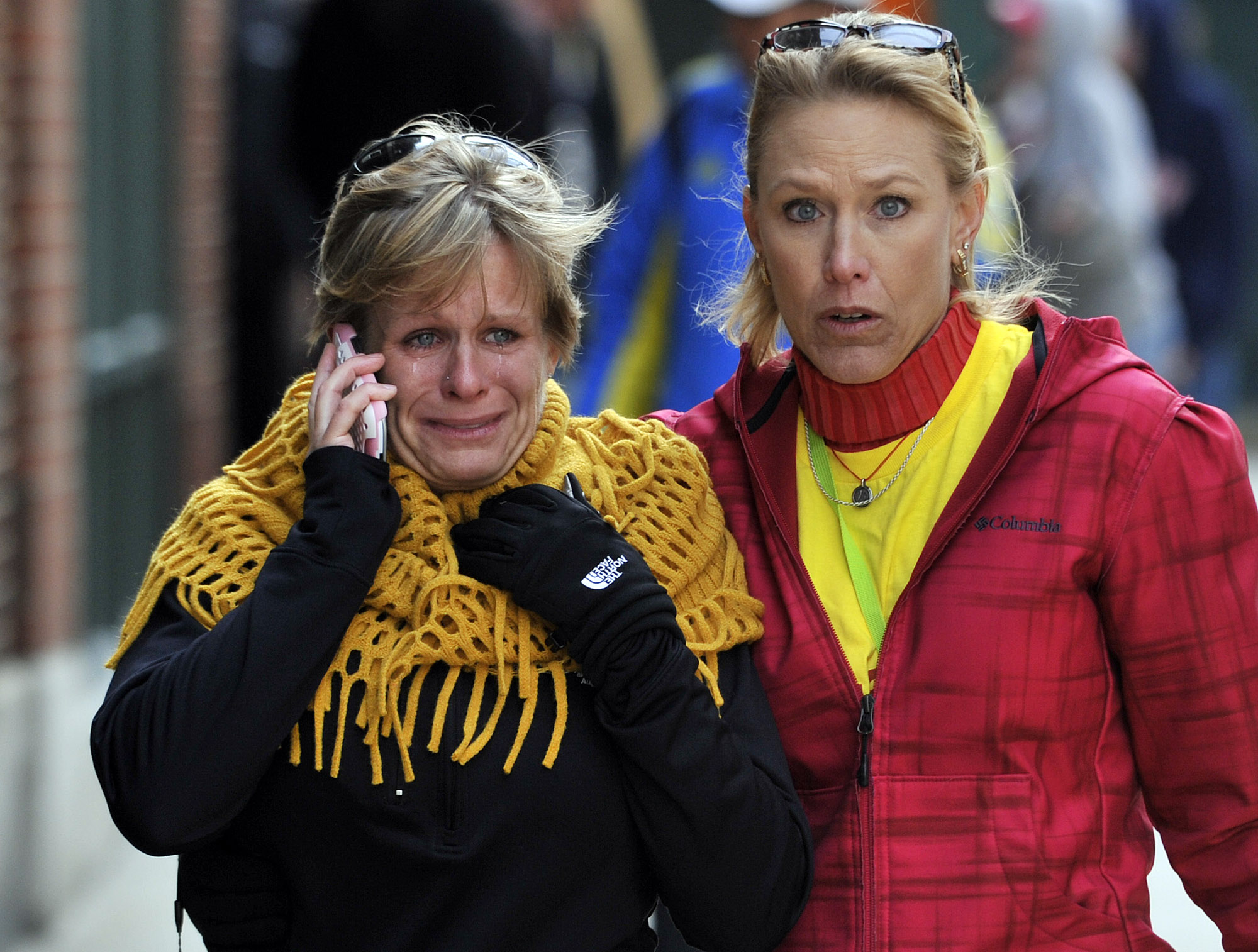 CBSNews.com interviewed runners and spectators who were present when the bombs went off in Boston Monday afternoon. Below, their stories in their own words.

Julia Morawoski, who had recently moved to Boston, was out taking pictures of the marathon:

"It was a really close call. I was standing right between both of the bombs. We were right up against the barriers - I had children around me - I could hear everybody talking about how excited they were, to see their family members running."

"Then we heard the first bang and it really didn't register with everybody it was a bomb. And two seconds later you could feel the vibration. And it was so strong. It was like an earthquake."

"Even then, people weren't really reacting because - people didn't want to believe it. They thought, no, it couldn't be. And then we saw the smoke. And then what really registered for everyone was the second one. And the second was really, really close to us. And at that point people just started to panic."

"We all started to push the barriers down to get on to the middle of the street. People were trying to get away from the buildings - they were scared a third one was going to come. And when I turned around I could just see bloody bodies on the street, right near where we were standing. I am sure the woman who was on the ground didn't make it. There's no way."

"We all just started running away. People were being really helpful. We were the first ones really to move, but I think a lot of people behind us were really disoriented and not really realizing what was happening."

"More than anything - you've always got crazy people doing crazy things like this, but a marathon. You have all the families and friend and children there. It's a day of celebration. People who were running were training so hard. It was a happy occasion and some crazy person does something like that - more than anything, I'm just in shock from this."

Demi Clark of North Carolina, a runner who was crossing the finish line as first blast went off:

"I looked at the official who was to my left thinking it was a cannon blast ... I had moved to the right - I had run almost the full marathon to the left. And I moved to the right to wave at [my family] so that my daughters could see me, who are 7 and 9, and if I hadn't - there were runners down all over the place to the left of me. Angel on my shoulder or whatever you want to call it. I was very lucky today."

"I looked at that official to the left of me, and he had this look of horror on his face. And I looked to my left and there were people blown up against the fences, there was blood everywhere, glass, runners were down, and it was just chaos. And then the second one went off. And that's when I said, 'Oh my God.' There was more than just one of these. What if the plaza goes up as a whole. My kids are in the stands, so I tried to immediately get to my husband, who had one kid under each arm. It was mass chaos, them getting out of the stands."

"The officials were trying to herd people back past the finish line, and keep the line moving. They didn't know what to do. So I just said no, 'I'm going to my family, I see my family, I see my family.' I was in tears, I couldn't see, I couldn't hear, because the blast was so loud it just popped out everybody's eardrums that were right there. It was mass chaos, and I didn't know if something else was going to happen. So we just wanted to get out of there. Get out of there."

"Really, really desperately wounded people. Blood was everywhere instantly. It was a very bad blast. They were wheeling people in wheelchairs with blood all over their faces. And just doing whatever they could."

"Nobody knew what to do - after the second one went off we were like, 'The city's under attack.'"

"It's a moment of disbelief and then you go into survival mode."

Lance Morrison, 26 years old, was sitting in the VIP bleachers at the finish line:

"I was sitting maybe 40 feet from it. I saw people being thrown into the air. The crowd opened up. The shock from the blast, you don't know what to think. As soon as I saw what happened, I ran up three bleachers rows, past the stairs to hop over, and then there was a second explosion and I just ran down the street."

"I don't know even know how to describe the loudness. You could feel it. You don't know what just happened. There was a sense of confusion, shock, and then terror."

"It happened, I saw the cloud, I saw a gap of people, I saw a guy on the ground and it freaked me out ... then maybe seven to 10 seconds 'til the second explosion. And I booked it. I dropped my phone on my bleachers, and realized it, and came back for it, because I knew my friends and family would try to reach me."

"I just ran, I ran as fast as I possibly could. People were pushing. It was loud, it was absolutely loud. Just smoke, and big explosion, and then it just dissipated."

"It was really quick, really, really quick. A cloud of smoke, a hole of people just opened up. I saw a guy fly up over the fence and land on the ground. It was nuts, the craziest thing I have ever seen. Pure chaos. Chaos. Everyone was running from the exit, I jumped from the third row up."

"The Boston police were telling everybody to move. They extremely fast, police, ambulances, were right there."

"There was tons of blood everywhere, from people's legs, that were being carried in the tents."

Panha Chheng of California. He is in Boston for work meetings and was at The Met Bar & Grill with friends; one block from the finish line:

"I was at the Met Bar. As we were coming out, we felt ... we heard and felt the first explosion and we saw the white plume of smoke."

"It's where all the families were - it was really densely packed."

"About 40 seconds later, we heard a second explosion, then we heard silence and saw a lot of people running away. One lady who was close by said people were exploded."

"There were people crying and police cars going in. Police started a perimeter. Everybody was frantically calling their relatives."

"The smoke after the second explosion was big, there was a lot. The smoke went upwards. It was a grayish white, it was big, 50 to 70 yards in the air."

"It was a really, really loud explosion. We felt it too, like a shudder."

James Minicucci was arriving in Boston by car to meet friends at the finish line when the explosions happened.

"I arrived and basically everybody was running from the Boylston area. No one could make a call, the lines were dropping. People were trying to locate one other. The streets were pretty empty actually. A lot of people trying to grab cabs."

"Some guy told us it was really bad, that several people lost their legs, there were amputations and not to go through to the finish line area."