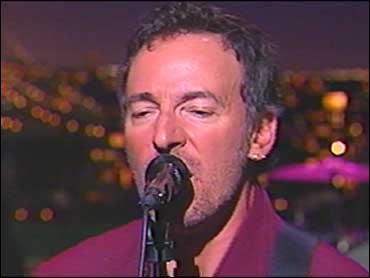 It's been a busy week for rocker Bruce Springsteen.

In the middle of a world tour, the singer-songwriter, known familiarly as "the Boss," took home three Grammy awards Sunday for his latest album, "The Rising." On Friday, he and his E Street Band headline their first broadcast network television special.

Created and recorded in the aftermath of Sept. 11, "The Rising" got five Grammy nominations and won three of the awards, for Best Rock Album, Best Rock Song, and Best Male Rock Vocal. It is Springsteen's first album of new songs with the E Street Band since 1984 and it debuted at No. 1 on the Billboard 200 chart and has been certified double platinum.

"I don't think I've ever seen a record where people absorbed it as quickly as they did," Springsteen says. "The first night, wow, people really knew it was just very different. Even with the other popular, classic records we made, you had a pretty good period of time go by before people would accept them and sing them as their own."

The band is expected to perform several numbers from the album in the one–hour TV special that airs Friday, Feb. 28, at 9 p.m. ET/PT on CBS.

The group went on tour in August, just after "The Rising" was released, and will continue to perform at concerts in the U.S., Europe, Australia and New Zealand throughout the spring.

Springsteen's philosophy on performing live hasn't changed over the years.

"Every night is different," he says, "never played to two audience that were alike in all the thousands of the shows we've done. Each crowd has a personality, some are excited, some listen a little harder, it depends. Try to feel the type of audience you have and relax and play into it. We have good personalities, in general, and I'll find myself playing to different people all night."

The New Jersey native has previously won seven Grammy Awards and an Academy Award and was inducted into the Rock and Roll Hall of Fame in 1999. He has been playing with the band on and off for three decades.

And that, he says, is one of his proudest accomplishments. "I have all my original band members on stage," he adds, "Guys are all alive, healthy, happy to be there, sustained our friendships very well and did good with that. There's not a lot of bands that have been around as long as we have with all their original members… pretty uncommon."