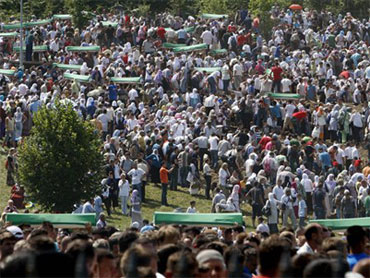 Hoisting hundreds of coffins aloft, a line of weeping relatives stretched for at least a mile Sunday as they honored Srebrenica massacre victims on the 15th anniversary of the worst atrocity in Europe since World War II.

A whole hillside in the eastern Bosnian town was dug out with graves, waiting for 775 coffins covered in green cloths to be laid to rest at the biggest Srebrenica funeral so far.

Still, that was less than a tenth of the total number of Muslim men and boys executed after Serb forces overran the U.N.-protected town on July 11, 1995, during the 1992-1995 Bosnian war.

"I grew up without a father and I don't even remember him," said 16-year-old Hajro Ibrahimovic.

When the procession reached the hill, some 60,000 people splintered into rivulets as relatives sought the exact grave for their loved ones. The sound of dirt pounding against the coffins' wooden lids echoed over the valley, as two announcers, one male and one female, solemnly read out the names of the victims being buried.

On that fateful day in 1995, some 30,000 Bosnian Muslims had flocked to the U.N. military base in the town's suburb of Potocari for refuge. But when Serb forces came, they forced outnumbered Dutch peacekeepers to open the gates. The Serbs then separated out the Muslim men and boys, putting them on trucks and carting them away, the vast majority never to be seen again. The Dutch peacekeepers lived.

The Srebrenica memorial center now stands across the road from that former U.N. base.

Andrew Gilmour, the special representative of Secretary-General Ban Ki-moon in neighboring Serbia, represented the U.N. at the event, and other U.N. Officials also attended, said Nick Birnback, spokesman for the U.N. Peacekeeping department. Ban plans to reaffirm the United Nations' sorrow over what took place in Srebrenica at a commemorative event Monday, a spokesman said.

The youngest victim buried Sunday was 14, the oldest 78, joining nearly 4,000 already buried at the memorial center. All the bodies had been excavated from mass graves and identified through DNA tests.

Another 1,844 victims have been identified, but their skeletons consist only of a few bones and relatives are refusing to bury them before more fragments are found.

Several months after the massacre, Serb troops excavated the original mass graves with bulldozers and moved victims to other locations in a futile effort to conceal the evidence of war crimes. As the machines plowed up bodies, they ripped them apart and fragments of the same person can be scattered among several sites.

Before the funeral, Muslim prayers and weeping mixed with the speeches of dignitaries condemning the crimes and calling for the perpetrators to be punished — something victims' families noted would not change the suffering they have endured.

Ahmet Cesko, 58, managed to evade being killed at Srebrenica by fleeing to government territory through the woods amid a manhunt by Serb troops. He came to pay his respect to comrades who did not survive the dangerous five-day hike.

Serb ambushes were set mainly next to creeks, he recalled, "like when you hunt animals, you wait next to water holes."

"Some of those I saw lying by the water I now see in coffins," he said.

Serbian President Boris Tadic was the first dignitary to arrive Sunday, saying he was coming in an "act of reconciliation." Some in the crowd yelled "Bravo, Boris!" while others asked "Where is Mladic?" — a reference to former Bosnian Serb general Ratko Mladic, who led the Serb troops into Srebrenica.

"I wish to welcome you, we are receiving you in peace," Kada Hotic, a representative of the Srebrenica widows, told Tadic while he held her hands.

Mladic and former Bosnian Serb president Radovan Karadzic were indicted with genocide for the Srebrenica massacre by the U.N. war crimes tribunal in 1995. Karadzic is now on trial at the tribunal in The Hague while Mladic is still a fugitive, presumably hiding in Serbia.

Tadic said he "will do everything" to apprehend all war crimes suspects in Serbia.

The U.S. ambassador to Bosnia, Charles English, read a message from President Barack Obama that urged "governments to redouble their efforts" and arrest those responsible for the war crimes at Srebrenica.

Obama called the Srebrenica genocide a "stain on our collective consciousness" that occurred even after decades of pledges of "never again" after Nazi atrocities during World War II.

The Bosnian Serbs were represented at the ceremony by a low-level delegation, headed by the deputy president of their ministate within Bosnia. In a deliberate snub, Karadzic's Serb Democratic Party honored him Saturday at a ceremony marking the 20th anniversary of the party's founding.

All but one of the victims buried Sunday were Muslims. Rudolf Hren's grave will so far be the only one marked with a Catholic cross.

"They asked me if I wanted him to be buried elsewhere because this is mainly a Muslim graveyard," said his mother, Barbara Hren. "He died with them. Let him rest with them."