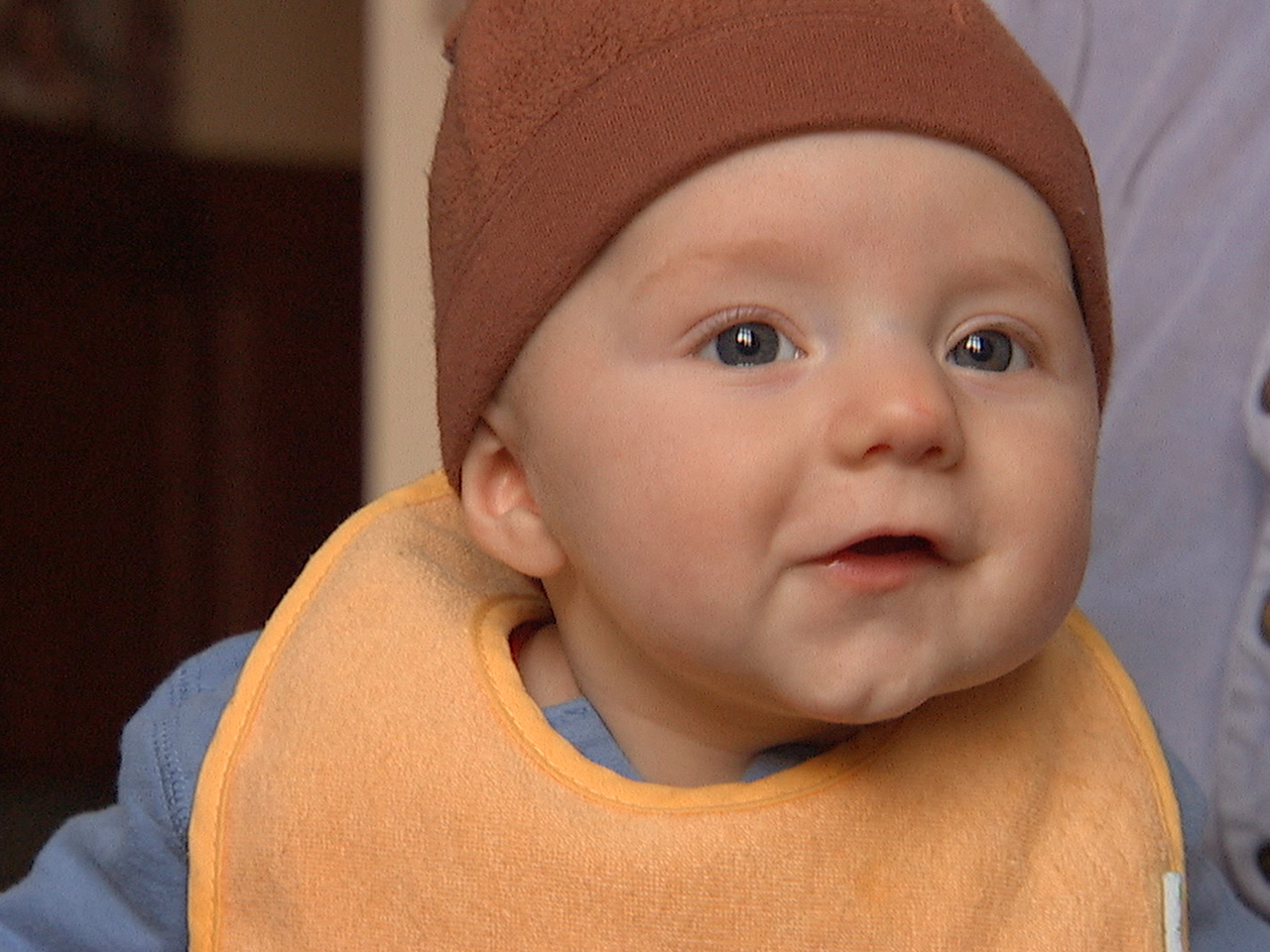 The following script is from "The Baby Lab" which aired on Nov. 18, 2012, and was rebroadcast on July 28, 2013. Lesley Stahl is the correspondent. Shari Finkelstein, producer.

It's a question people have asked for as long as there have been people: are human beings inherently good? Are we born with a sense of morality or do we arrive blank slates, waiting for the world to teach us right from wrong? Or could it be worse? Do we start out nasty, selfish devils, who need our parents, teachers, and religions to whip us into shape?

As we first reported last fall, the only way to know for sure, is to ask a baby. But until recently, it's been hard to persuade them to open up and share their secrets. Enter the baby lab.

This is the creature at the center of the greatest philosophical, moral, and religious debates about the nature of man: the human baby. They don't do much, can't talk, can't write, can't expound at length about their moral philosophies. But does that mean they don't have one? The philosopher Rousseau considered babies "perfect idiots...Knowing nothing," and Yale psychologist Karen Wynn, director of the Infant Cognition Center here, the baby lab, says for most of its history, her field agreed.

Lesley Stahl: Didn't we just think that these creatures at three months and even six months were basically just little blobs?

No pulling levers for treats or running mazes for these study subjects. But they can watch puppet shows. And Wynn is part of a new wave of researchers who have discovered seemingly simple ways to probe what's really going on in those adorable little heads. We watched as Wynn and her team asked a question that 20 years ago might have gotten her laughed out of her field. Does Wesley here, at the ripe old age of 5 months, know the difference between right and wrong?

Wesley watches as the puppet in the center struggles to open up a box with a toy inside. The puppy in the yellow shirt comes over and lends a hand. Then the scene repeats itself, but this time the puppy in the blue shirt comes and slams the box shut. Nice behavior...mean behavior...at least to our eyes. But is that how a 5-month-old sees it, and does he have a preference?

Annie: Wesley, do you remember these guys from the show?

To find out, a researcher who doesn't know which puppet was nice and which was mean, offers Wesley a choice.

He can't answer, but he can reach... (reaches for nice puppet)

Wesley chose the good guy and he wasn't alone.

More than three fourths of the babies tested reached for the nice puppet. Wynn tried it out on even younger babies, 3 month olds, who can't control their arms enough to reach. But they can vote with their eyes, since research has shown that even very young babies look longer at things they like. Daisy here looked at the mean puppet for 5 seconds; then switched to the nice one for 33.

Lesley Stahl: So basically as young as three months old, we human beings show a preference for nice people over mean people.

Karen Wynn: Study after study after study, the results are always consistently babies feeling positively towards helpful individuals in the world. And disapproving, disliking, maybe condemning individuals who are antisocial towards others.

Wynn and her team first published their findings about baby morality in the journal "Nature" in 2007, and they've continued to publish follow-up studies in other peer-reviewed journals ever since -- for instance on this experiment.

They showed babies like James here a puppet behaving badly -- instead of rolling the ball back to the puppet in the middle, this green-shirted bunny keeps the other puppet's ball, and runs away.

Then James is shown a second show -- this time the bunny who he just saw steal the ball, tries to open up the box to get the toy. Will James still prefer the puppet who helps out? Or will he now prefer the one who slams the box shut?

He chose the one who slammed it shut, as did 81 percent of babies tested. The study's conclusion: babies seem to view the ball thief "as deserving punishment."

Lesley Stahl: So do you think that babies, therefore, are born with an innate sense of justice?

Karen Wynn: At a very elemental level, I think so.

Paul Bloom: We think we see here the foundations for morality.

Paul Bloom is also a professor of psychology at Yale, with his own lab. He's collaborated with Wynn on many of her baby studies, and he also happens to be her husband.

Paul Bloom: I feel we're making discoveries. I feel like we're-- we're discovering that what seems to be one way really isn't. What seems to be an ignorant and unknowing baby is actually a creature with this alarming sophistication, this subtle knowledge.

And he says discovering this in babies who can't walk, talk, or even crawl yet, suggests it has to come built in.

Lesley Stahl: So, remember B.F. Skinner, who said that we had to teach our children everything through conditioning. So, does this just wipe him off the map?

Wait a minute, if babies are born with a basic sense of right and wrong, a universal moral core, where does all the evil in the world come from? Is that all learned? Well maybe not. Take a look at this new series of discoveries in the Yale baby lab...

In offering babies this seemingly small, innocuous choice -- graham crackers or Cheerios -- Wynn is probing something big: the origins of bias. The tendency to prefer others who are similar to ourselves.

Apparently so. But if babies have positive feelings for the similar puppet, do they actually have negative feelings for the one who's different? To find out, Wynn showed babies the grey cat -- the one who liked the opposite food, struggling to open up the box to get a toy. Will Gregory here want to see the graham cracker eater treated well? Or does he want him treated badly?

Lesley Stahl: That is amazing. So he went with his bias in a way.

And so did Nate and 87 percent of the other babies tested. From this Wynn concludes that infants prefer those "who harm... others" who are unlike them.

Paul Bloom: What could be more arbitrary than whether you like graham crackers or Cheerios?

Paul Bloom: Nothing. But it matters. It matters to the young baby. We are predisposed to break the world up into different human groups based on the most subtle and seemingly irrelevant cues, and that, to some extent, is the dark side of morality.

Lesley Stahl: We want the other to be punished?

Karen Wynn: In our studies, babies seem as if they do want the other to be punished.

Karen Wynn: I think, we are built to, you know, at the drop of a hat, create us and them.

Paul Bloom: And that's why we're not that moral. We have an initial moral sense that is in some ways very impressive, and in some ways, really depressing -- that we see some of the worst biases in adults reflected in the minds and in the behaviors of young babies.

But Bloom says understanding our earliest instincts can help...

Paul Bloom: If you want to eradicate racism, for instance, you really are going to want to know to what extent are babies little bigots, to what extent is racism a natural part of humanity.

Lesley Stahl: Sounds to me like the experiment show they are little bigots.

Paul Bloom: I think to some extent, a bias to favor the self, where the self could be people who look like me, people who act like me, people who have the same taste as me, is a very strong human bias. It's what one would expect from a creature like us who evolved from natural selection, but it has terrible consequences.

He says it makes sense that evolution would predispose us to be wary of "the other" for survival, so we need society and parental nurturing to intervene. He showed us one last series of experiments being done in his lab -- not with babies, but with older children of different ages. The kids get to decide how many tokens they'll get, versus how many will go to another child they're told will come in later. They're told the tokens can be traded in for prizes.

Paul Bloom: The youngest children in the studies are obsessed with social comparison.

[Mark: So you get these seven. She doesn't get any.

Paul Bloom: They don't care about fairness. What they want is they want relatively more.

But a funny thing happens as kids get older. Around age 8, they start choosing the equal, fair option more and more. And by 9 or 10, we saw kids doing something really crazy --

-- deliberately giving the other kid more.

They become generous. Chalk one up to society.

So we can learn to temper some of those nasty tendencies we're wired for -- the selfishness, the bias -- but he says the instinct is still there.

Paul Bloom: When we have these findings with the kids, the kids who choose this and not this, the kids in the baby studies who favor the one who is similar to them, the same taste and everything-- none of this goes away. I think as adults we can always see these and kind of nod.

Lesley Stahl: Yeah. It's still in us. We're fighting it.

Paul Bloom: And the truth is, when we're under pressure, when life is difficult, we regress to our younger selves and all of this elaborate stuff we have on top disappears.

But of course adversity can bring out the best in us too -- heroism, selfless sacrifice for strangers -- all of which may have its roots right here.

Paul Bloom: Great kindness, great altruism, a magnificent sense of impartial justice, have their seeds in the baby's mind. Both aspects of us, the good and the bad are the product I think of biological evolution.

And so it seems we're left where we all began: with a mix of altruism, selfishness, justice, bigotry, kindness. A lot more than any of us expected to discover in a blob.

Lesley Stahl: Well, I end my conversation with you with far more respect for babies. Who knew?