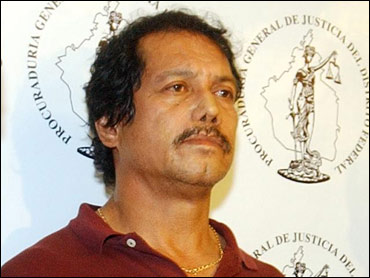 A fugitive considered one of Mexico's most dangerous criminals was deported Tuesday after being arrested in Southern California, nearly 19 years after a sensational armed escape from a Mexican prison courtroom, immigration officials said.

Surprised neighbors described Rios as a religious man who lived with his wife and three teenage children and ran a janitorial service. Pastor Melvin Acevedo of Ebenezer World Ministry said he had known Rios as Arturo Montoya for 12 years.

As he was escorted off a plane in Mexico City, Rios told reporters he had fled to the United States to put his bloody past behind him.

"Let me tell you that Jesus changed my life, and that's why I left all this," he said after he was escorted off a police plane under heavy guard. "God forgives even the worst criminal."

Kice said investigators with the state Department of Motor Vehicles received a tip about Rios' whereabouts and were told he had undergone plastic surgery to change his appearance.

He was arrested without a struggle and his identity was confirmed by fingerprint matching with prints supplied by Mexico's attorney general's office, Kice said.

Unaware he would be handed over to Mexican authorities, Rios agreed to a voluntary deportation - a choice frequently made by those who hope to avoid detention or formal deportation orders that can bar them from returning the United States.

Kice said Rios was deported at the San Ysidro border crossing, near San Diego, where he was met by Mexican authorities, who flew him to Mexico City.

Rios, a former paratrooper in the Mexican military, was featured on Mexico's most wanted fugitives list for his alleged role in a series of violent bank robberies in Mexico City during the 1970s and 1980s, according to ICE. He was wanted in Mexico on eight felony warrants that include charges of murder, kidnapping and robbery.

"I regret it with all my heart," Rios said of the crimes he allegedly committed. Asked what happened to the money from the bank robberies, he said "it was all spent."

Rios had escaped from a courtroom in Mexico City's Southern Prison in November 1986, one of a group of inmates freed by armed assailants who burst in, tied up 20 people and used a hand grenade to blast a hole through a wall to escape, according to ICE and news accounts at the time.

Neighbors in South Gate said they knew him as a man who often sang religious songs in his home and once put up an outdoor movie screen and showed religious films.

"He seemed so respectful and serious," neighbor Carmen Ramos, 43, said in Spanish.

In the last 10 months, ICE's Los Angeles fugitive operations team has arrested at least a dozen Mexican nationals wanted there on murder charges.

By Laura Wides and Eduardo Castillo