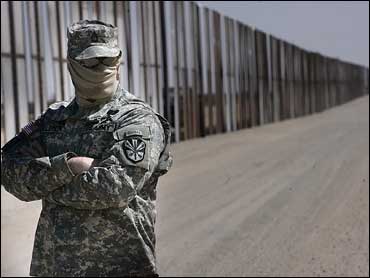 City officials in the heavily populated valley had anticipated a "virtual" fence of surveillance cameras and border patrols.

Instead, a Customs and Border Protection map depicts a structure running piecemeal along a 600-mile stretch of Texas from Presidio to Brownsville, a border region where daily life is binational.

"We were given the impression that they were not going to be building walls, that there would be more cameras, surveillance, boots on the ground," said Mike Allen, head of McAllen Economic Development Corp.

"This is going to seriously affect the farmers," he said. "They will not have access to water. It's just going to create bedlam."

The map, obtained by The Associated Press, was attached to a memo addressed to "Dear Texas Homeland Security Partner." It outlines a plan to build 370 miles (of fence and 200 miles of vehicle barriers, such as concrete barriers, by the end of 2008.

Russ Knocke, a spokesman for Homeland Security Secretary Michael Chertoff, said the so-called virtual fence will not work in urban areas and the federal government has delivered a consistent message to local officials.

"We are utilizing traditional fencing at the border generally in those areas including metropolitan areas where it is easier for an alien ... to conceal themselves in a home or a business," he said.

Knocke said agents would use such advanced technology as sensors, radar and aerial drones in remote border areas.

Environmentalists fear the fence will block Rio Grande water access to endangered cats such as ocelots and jaguarundi and ruin key feeding and resting areas for migratory birds.

Knocke said environmental assessments were being conducted, but border security outweighed such concerns.

"For more than two decades this has been a problem that has been bubbling up," he said. "There's an expectation by the American people that we secure our borders."

Chertoff has already waived requirements to get permits in environmentally sensitive areas in order to expedite construction of the fence, Knocke said.

Mexicans cross daily to make bank deposits, buy real estate, shop and work — activities Salinas said would be threatened by the ill feelings generated in Mexico by the fence.

"Irrigation, that's one concern," Salinas said. "The other is the indirect message you're sending to you neighbor to the south."

Bush called for 700 miles of fence during his national address on immigration reform last May, and Congress approved it. Of the $1.2 billion needed, at least $400 million has already been appropriated, Texas Congressman Henry Cuellar said.

The new Democratic majority in the U.S. Congress could modify the law or withhold funding, Cuellar said.

"It's going to be difficult, but we're sure going to do everything we can," he said.

"I would be very concerned if they are not being listened to," she said. "We should have local input and private property rights should be taken into account. ... I expect the department (of Homeland Security) to honor that commitment."

McAllen Mayor Richard Cortez doubts a fence would be effective. He said he has seen people forming human ladders and jumping off international bridges into the United States in full daylight and within view of Border Patrol and Customs agents.

"No physical wall is going to keep people from coming in," he said. "The core of the problem is an economic issue. We have integrated all of the markets in North America but we have failed to integrate the labor market. It's the market forces that are bringing people here to work."

Officials said Chertoff assured them they'd be consulted before any fence went up.

"We met with Secretary Chertoff and we were given a commitment that he would talk to the locals before building a wall, so we're surprised that this is happening," Salinas said. "We feel there is already a structure there, which is the Rio Grande river."