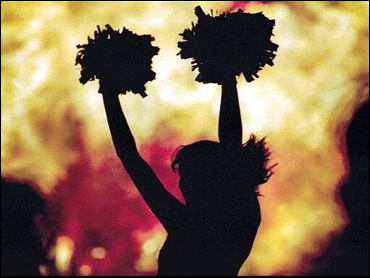 Sideline booty-shakin' at Texas high school football games would be restricted to more ladylike performances from the cheering squad, under legislation approved Tuesday by the Texas House.

The measure, dubbed "the booty bill," still must be approved by the Senate and sent to the governor's desk before it can become law.

"Girls can get out and do all of these overly sexually performances and we applaud them and that's not right," said Democratic Rep. Al Edwards of Houston, who filed the legislation.

Edwards argued that lascivious exhibitions are a distraction for high school students that result in pregnancies, high school dropouts, contraction of AIDS and herpes and "cutting off their youthful life at an early age."

Bawdy performances are not defined in the bill, which was approved on a 65-56 vote.

"Any adult that's been involved with sex in their lives, they know it when they see it," Edwards said.

In a state known for its reverence of Friday-night football, Edwards said he filed the legislation after seeing too many ribald routines by young girls in his district.

Opponents, including the American Civil Liberties Union, say the measure is unnecessary because state law already prohibits public lewdness by students on or near a school campus.

Critics also argue that the difference between suggestive dancing and artistic expression can be difficult to determine.

Several lawmakers periodically waved pompoms in debate that was alternately comical and fiery.

"This is a ridiculous bill ... I don't know how this bill got to the floor. It's stupid."

But, proponents say they like the measure because it gives parents support in addressing their teenagers' behavior.

"I think that to have suggestive performances is not good for the girls or the guys at a time in life when hormones are already very active," said Cathie Adams, president of the Texas Eagle Forum, a conservative watchdog group that favors the proposal.

"I think that there are plenty of ways to show artistic expression without movement that mimics sensual behavior."

Although cheerleaders must meet the same no-pass, no-play academic requirements of athletes, cheerleading is not a competition sanctioned by the University Interscholastic League, the governing body of Texas high school sports.

The UIL also does not have performance regulations for squads who cheer for their teams at state championships.