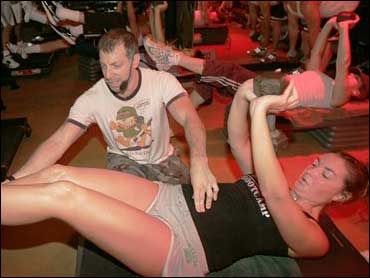 It's a fitness fad not for the faint of heart.

It's exercise boot camp — a grueling workout for those tough enough to follow orders from a berating, loud-mouthed instructor.

"It's not for people with control issues," jokes instructor Barry Jay, who runs a fitness studio offering boot camp sessions a few blocks from Sunset Strip.

The military-style program — a circuit of drills ranging from running and jumping jacks to push-ups, squats and sit-ups — appeals to people with busy schedules who need to pack a hard workout into a quick hour.

Gyms are increasingly offering the program as boot camp sessions gain national exposure on makeover television shows. Many boot camps in Southern California are taught at parks and beaches by former soldiers.

Jay's "Bootcamp Academy" session, 20 classes over four weeks, costs $235. Other camps can run longer or shorter, and the cost varies.

"One of the reasons boot camps are incredibly popular is because they provide a pretty time-efficient approach to exercise," said Cedric X. Bryant, chief exercise physiologist for the American Council on Exercise.

"You work the whole body. You're in and out. For most of us who are time-pressured, it's a nice way to fit fitness in," said Bryant.

To prepare for their roles as U.S. Marines, the cast of the Gulf War movie "Jarhead" took a studio boot camp program before trying the real thing for four days at the former George Air Force Base in the Southern California desert.

"They said the training got them ready for the real workout," said Bob Harper, a boot camp instructor on the NBC reality show "The Biggest Loser" who trained the "Jarhead" cast.

At a recent session at Jay's studio, Barry's Bootcamp, 30 participants begin their workout at 5:30 a.m. They file into a darkened room lined with treadmills and a row of dumbbells, pair up and begin their drills.

As the sounds of a Black Eyed Peas song fill the gym, Jay orders half of the class to perform squats while the other half do sit-ups. Five minutes later, the groups switch positions and await the next command.

Although dressed in Army fatigues and sporting a buzz cut, Jay, 42, didn't serve in the military. But he acts the part of drill sergeant, barking at students who slow down on the treadmill, and keeping a watchful eye on those who take bathroom breaks. Occasionally, he'll sit on someone doing push-ups to force better form.

Anyone who ditches a session faces discipline at the next one.

"If you don't show up, I will call you, I will text-message you, I will pick you up at 4:30 a.m. the next day," he says with a laugh. Punishment may be an extra 20 minutes of running or forcing the offender's partner to do an extra set of push-ups.

"Barry always picks on me in class because I'm the slowest," said Lesley Wolff, 34, a comedian and radio host. "He'll yell, but it's because he doesn't want you to cut corners."

"The gym can be an isolating place," she said. "Here you form a camaraderie with people, because you're going through this challenge together."

Others say they like the variety and being able to feed off the energy of fellow enlistees.

"I was doing yoga before and got so sick of it. It was boring and slow," said Jenny Levitan, a 27-year-old law student. "He changes the workout everyday, and I like that."

Jay jokes that "the ideal candidate might be someone with attention deficit disorder."

While boot camps generally attract gung-ho types trying to elevate their strength and endurance, experts say those who feel out of shape shouldn't be afraid to join.

Bryant, the exercise physiologist, said most boot camp classes start with low-impact exercise and gradually increase the level of challenge.

"Monitor your level of exertion and exercise within your physical range," Bryant said. "If you find it enjoyable, then your body will quickly adapt."