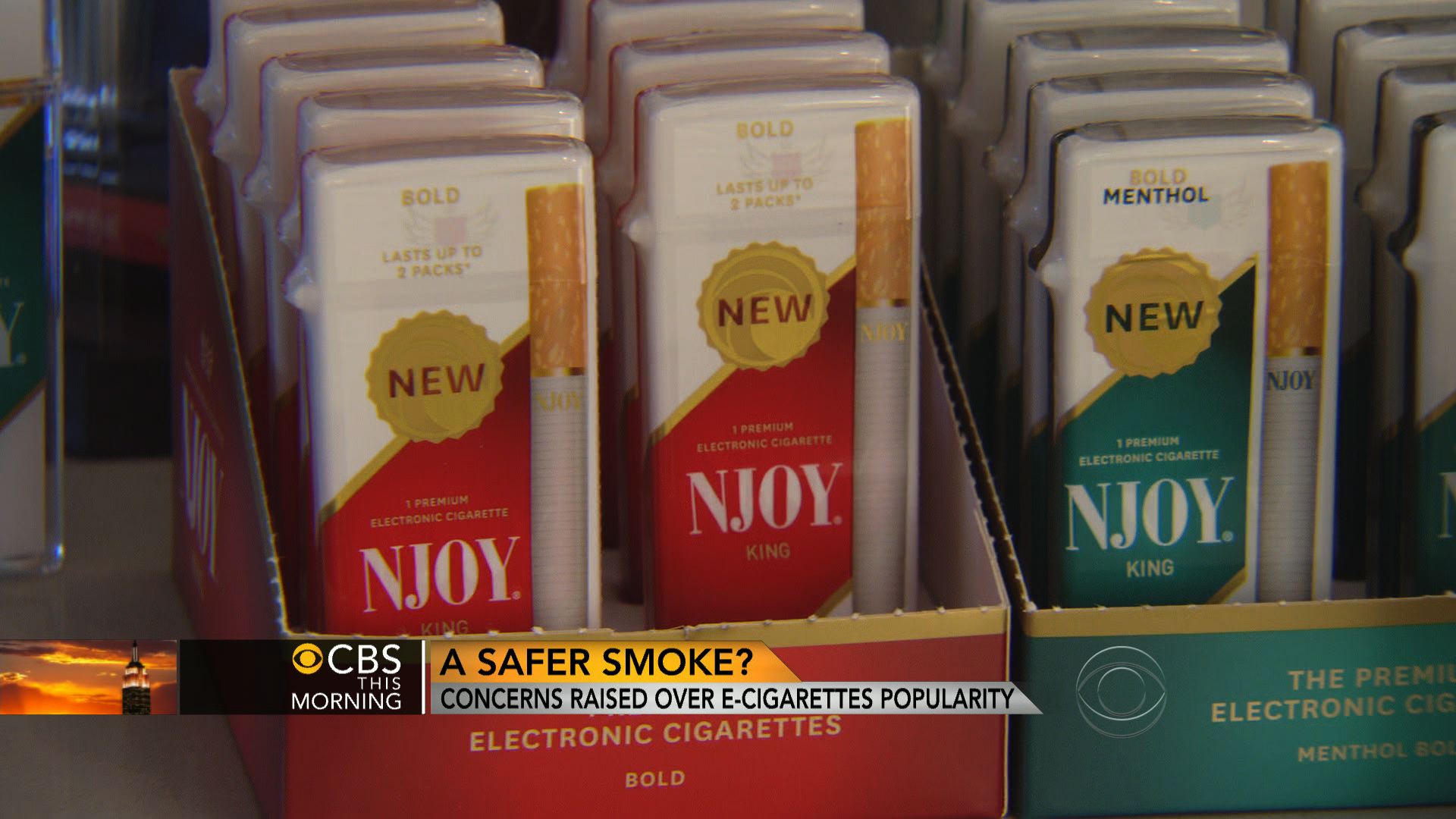 (CBS News) Late last year -- for the first time in over four decades -- cigarettes made a return to television advertising, when electronic cigarette maker NJOY aired a spot approved by cable networks.

NJOY is the best-selling brand of e-cigarettes or "e-cigs," a battery-powered device that mimics the sensation of smoking a real cigarette by delivering nicotine through a smoke-like vapor. There is no tobacco or combustion, and when exhaled, no odor.

As NJOY's Weiss explained it, e-cigarette makers are aiming for a unique and improved sensation.

"It's not that I want to be as good as a cigarette. I'd like to be better than a cigarette," he said.

E-cigarettes have existed for nearly a decade but the industry has rapidly expanded within the last year.

And while traditional cigarette manufacturers will rake in approximately $80 billion this year, NJOY's Weiss says, he's confident "the good guys," -- in his mind, e-cigarette makers -- will ultimately come out on top.

"We feel it's a bit of a David versus Goliath battle. We're taking on big tobacco," Weiss told Glor. "They're a good public enemy to have."

Still, some in the medical community -- including Dr. Neil Schachter, a leading lung specialist at New York's Mount Sinai Hospital -- remain unconvinced that e-cigarette manufacturers are the so-called good guys.

The Food and Drug Administration does not currently regulate e-cigarettes, therefore manufactures are not mandated to disclose the ingredients.

The FDA has consistently promised to propose regulatory guidelines for e-cigarettes and while the organiation declined to speak to CBS News on camera, they issues this statement: "Further research is needed to assess the potential public health benefits and risks of electronic cigarettes and other novel tobacco products."

The research could take years according to Erika Sward, of the American Lung Association

"We are very concerned that there is literally no federal oversight of these products. We do not know what's in them. We do not know how they are being used," Sward explained.

"I would hope that e-cigarettes would ultimately not have the same god awful impact that regular tobacco products have had, but the jury is still out," she added.

For his part, Weiss welcomes FDA regulation, explaining that it would enhance his company's vision of a future where smoking lacks the health consequences it is known for today.

"I've got a three-year-old and a six-year-old. And, I want to grow up in a world where they can ask me one day, 'So, wait a second, dad. I don't understand. You used to little this thing on fire and then you put it in your mouth? I mean, how did that even work?'" Weiss said.

Stand-up comedian Louis C.K. shares with Charlie Rose what Shandling meant to him and reflects on an email he received a few weeks before Shandling died

World of Weddings: Same-sex couples in Israel
Thanks for reading CBS NEWS.
Create your free account or log in
for more features.
View CBS News In
CBS News App Open
Chrome Safari Continue
Be the first to know
Get browser notifications for breaking news, live events, and exclusive reporting.