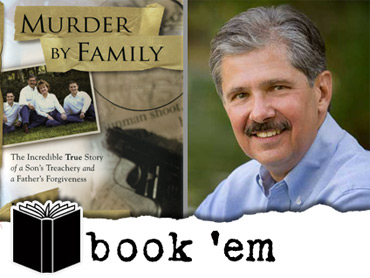 (CBS/Howard Books)
MURDER BY FAMILY: The Incredible True Story of a Son's Treachery and a Father's Forgiveness.

It was an evening of excitement, December 10, 2003, as the Whitaker family returned home from a dinner celebrating their son Bart's impending graduation from college. Upon entering the house, the family was met by a masked gunman who opened fire, instantly killing the youngest Whitaker son, Kevin, and his mother, Patricia. The father, Kent, and Bart were also shot, but survived.

MURDER BY FAMILY: The Incredible True Story of a Son's Treachery and a Father's Forgiveness is the story of Kent Whitaker's heart-wrenching journey toward forgiveness and faith after the brutal murder of his wife and son. While lying in the emergency room after being airlifted from his home, Kent soon learned of his family's fate. His emotions called for a response to either forever hate the murderer... or forgive him.

At that moment, Kent made the decision to forgive the nameless stranger who had taken so much. "I have had a hundred people tell me that they think I'm nuts—that I should hate the shooter and cry out for vengeance," writes Kent. "Perhaps I am crazy, but I believe that in those early moments God worked supernaturally, allowing me to forgive completely and immediately…Little did I realize just how important my decision to forgive would be in the coming months."

An investigation uncovered that a murder plot had been orchestrated by Kent's oldest son Bart—whom Kent had unknowingly forgiven. Kent Whitaker gives readers a behind-the-scenes account from the day of the murders up to Bart's sentencing, and includes excerpts of letters from Bart as he tries to explain why he did it.

Today, 6 years later, Kent is still mentoring Bart during visits to prison. He also has a new focus: Kent Whitaker remarried this spring.

You've said lots of people don't understand how you could forgive your son Bart for killing your wife, Tricia, and your other son, Kevin. Why is forgiveness the right thing for you?

Whitaker: Forgiveness is the right thing for everyone, not just for me. People have a hard time understanding because forgiveness is one of the hardest things we humans are called to do, and this loss was beyond what most people can even imagine. "Don't get mad - get even!" seems much more satisfying to us. But revenge keeps us from healing, and I wanted to be whole again. I wanted to find life and love again, and forgiveness is the only way to reach that hope. Every psychologist, priest, rabbi and minister will tell you that because it is universally true. Revenge leads to bitterness and a hard heart. I didn't want that.

Do you think everyone should be capable of this kind of forgiveness?

Whitaker: Everyone is capable of forgiveness - it's just difficult. When someone hurts us, it creates a deep wound. Forgiveness isn't forgetting what they did, nor is it letting them off the hook for the consequences to both of you for what they did, nor is it saying that it is alright. It is a question of perspective: do you want to hurt them or do you want to heal - you can't have both. Forgiveness cleans your wound so it can heal; holding on to revenge and hate prevents healing. It festers and becomes infected within us, even as it scabs over, and will poison us in big and small ways for the rest of our lives. It cannot heal and therefore you cannot heal. The person who hurt us is responsible for the wound, but we are responsible for the infection and the delay in becoming whole again. Don't blame them for that.

When you realized your own son committed the killings, and tried to kill you, did that make forgiveness any harder… or easier?

Whitaker: I don't know. It certainly would have made it different. But God helped me make the decision to forgive before I found out that Bart would become a suspect, and it was a complete forgiveness. How that happened is a pretty amazing story, as are the far-reaching consequences of that decision. I write about it in Murder by Family, and I encourage people to read it because it explains that process in detail, and is full of other insights that a one hour television show cannot cover. And that isn't a shameless plug for my gain because I am donating every penny of my book royalties to charity. You can find out more about all of this at my website.

How would you describe your relationship with Bart today?

Whitaker: We have a much deeper and more open relationship today than ever before. He no longer deflects criticism with excuses or justification. We have the kind of open relationship I wish we had had before all of this. He is, after all, my son, and while I hate what he did, I still love him.

He still struggles with deep guilt, and has a hard time understanding my forgiveness. But the forgiveness God helped me reach that night has allowed me to "model" for him the forgiveness of the prodigal son's father in that famous parable that Jesus told in Luke 15. But this is the same kind of total forgiveness that God the Father offers to us all, if we are truly sorry and ask Him for it. Bart has asked for and received forgiveness from me and (I believe) from God. Of course, that does not remove the consequences of his actions, and society must protect itself from those who don't live within its constraints, even when that person is ill. But it does mean that relationships can be reconciled. Like I said, forgiveness is the first step towards healing and restoration.

How has your decision to forgive Bart affected your life since then?

Whitaker: Forgiveness has brought about so many positive things. It has restored my relationship with my son, even as he faces execution. It has allowed me to travel through grief, doing all the necessary hard work but without any unnecessary roadblocks. The loss of Kevin and Tricia, and really Bart, too, is still painful, but it isn't the debilitating pain that comes in the early stages of grief. Forgiveness has restored me to the point that not only am I whole again, but have found a wonderful woman, and have remarried. I have rejoined life, and that should be a powerful encouragement to those without hope, struggling through loss and hurt. There really is a way back to joy, and forgiving those who hurt you is the necessary first step.

Your son is on death row. Are you trying to prevent the state of Texas from carrying out his execution?

Whitaker: There is really very little I can do now to stop Bart's execution. I tried unsuccessfully to convince the district attorney to not pursue the death penalty, and to accept our offer of a guilty plea with two stacked life sentences. That was on the table for 18 months leading up to the trial. If they had accepted that, Bart would have served at least 80 years without time off for anything before becoming eligible for parole at 106, and it would have allowed my family and Tricia's family (who by the way, also argued for this deal) to avoid the horror of a trial. But once they decided to pursue the death penalty and the jury of his peers reached that decision, it was beyond me to have any impact. The State of Texas and ultimately the Federal appeals systems will decide whether or not to carry out the execution.

BONUS QUESTION: What question should Crimesider have asked you that we didn't… and what's the answer?

Whitaker: I guess the question would be: What hope can my story give to those who have been deeply wounded by others?

Everyone has been hurt by others, some horribly. Will we waste that pain in the hollow bitterness of revenge or free ourselves from it and grow? Because conflict gives us opportunity for change and growth. Hearing my story, and my wife Tanya's (who also has a big fat story of betrayal and forgiveness) gives others hope that they, too, can rejoin life. We're proof of that, and wherever we speak one universal comment is "Thank you! Hearing this gives me hope, and I need hope! If you can forgive Bart, maybe I can forgive, too. I want to have joy; I want more from life. You've shown me that's possible."
This apparent hunger for more from life happens so often that Tanya and I decided to write a book about this process and how we can grow within our stories, even the painful parts. This gives us hope within our pain. One thing we know is that we don't write alone, because God helps us write our stories, and will work our sorrow to good, if we let Him, as He has done in both of our lives. There is always more to our story than what we can see. It should be a great encouragement for everyone who struggles, wanting to recover from the wounds caused by others.

(Simon & Schuster)
ABOUT THE AUTHOR
KENT WHITAKER worked as a comptroller for a Houston construction firm until the murder of his wife and son. Kent then retired, focusing energy into his emotional healing, restoring the relationship with his son, and dealing with his son's murder trial. He now volunteers for prison ministries and nonprofit organizations—including helping lead a support ministry for widows and widowers at River Pointe Community Church, which he attends. Kent travels nationally, speaking to churches, conferences, and organizations about how God heals and forgives.