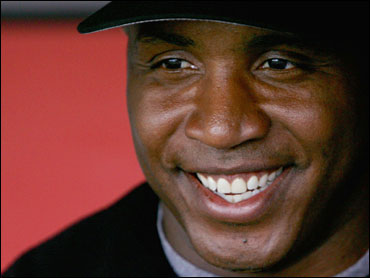 Barry Bonds used a vast array of performance-enhancing drugs, including steroids and human growth hormone, for at least five seasons beginning in 1998, according to a book written by two San Francisco Chronicle reporters.

An excerpt from "Game of Shadows," which details the San Francisco slugger's extensive doping program, appears in the March 13 issue of Sports Illustrated.

"I won't even look at it. For what? There's no need to," Bonds said Tuesday at Giants camp in Scottsdale, Ariz. The Giants said Bonds would not comment any further.

Bonds, who testified before a California federal grand jury looking into steroid use by top athletes, repeatedly has denied using performance-enhancing drugs. Phone messages left by The Associated Press seeking comment from his attorney and publicist were not immediately returned Tuesday.

Baseball did not ban performance-enhancing drugs until after the 2002 season.

Authors Mark Fainaru-Wada and Lance Williams, who led the newspaper's coverage of the BALCO scandal, recount in remarkable detail the specifics of Bonds' drug regimen, which they write started in 1998 with injections of Winstrol, a powerful steroid also linked to Rafael Palmeiro.

According to the book, Bonds was using two undetectable designer steroids, informally known as the cream and the clear, plus insulin, human growth hormone and other performance enhancers by 2001, when he hit 73 home runs for the Giants to break Mark McGwire's single-season record of 70 set in 1998.

In fact, according to the San Francisco Chronicle, Bonds decided to use performance-enhancing substances after watching McGwire – whom the excerpt says he suspected was "a juicer" – gain national acclaim for eclipsing Roger Maris' storied single-season record.

As the Chronicle reports, an excerpt of the book also says Bonds "learned how to inject himself" and describes one conversation with Greg Anderson, his trainer, in which Bonds says of starting another drug cycle, "I'll do it myself."

"Game of Shadows" is scheduled to be published March 27 by Gotham Books.

BALCO, the Bay Area Laboratory Co-Operative run by Victor Conte, kept track of Bonds' drug use in detail, with folders and calendars that chronicled everything from schedules and quantities to his testosterone levels. Much of that information was obtained by federal agents when they raided the lab in September 2003.

According to reports in The Chronicle, Bonds testified to the grand jury in late 2003 that he used a clear substance and a cream given to him by his personal trainer, Greg Anderson, who pleaded guilty in the BALCO case last July to steroid distribution and money laundering. Bonds said he didn't know that what he was using was a steroid, the newspaper reported.

In October, Anderson was sentenced to three months in prison and three months in home confinement. Conte was among three other men who also pleaded guilty to their role in supplying steroids to elite athletes.

According to the book, Bonds used several substances in various forms — by injecting himself with a syringe, taking injections from Anderson, gulping pills, putting liquid drops under his tongue or rubbing cream on his skin.

Bonds became so experienced and well-versed with the regimen that he occasionally overruled Anderson and took control of his own doping schedule, the book says.

Baseball commissioner Bud Selig had not reviewed the material and had no comment, spokesman Rich Levin said. Selig was en route from Milwaukee to Phoenix for the World Baseball Classic.

Bonds, who will turn 42 in July, played in only 14 games last season, all in September, following three knee operations. He showed signs of his old self in his brief return, hitting five homers in 42 at-bats.

He caused a stir before spring training this year with contradicting interviews in February. Bonds told USA Today that his knee bothered him so much he would probably retire after the season, with or without the home run record. Then he told MLB.com that his knee brace felt good enough for him to possibly play 10 more seasons.

Bonds has been working out with the Giants in Scottsdale, but has not played in a spring training game yet.

He is in the final season of his $90 million, five-year contract and will be eligible for free agency after the World Series, meaning his time with the Giants could be up even if he doesn't retire. He said he would have a hard time envisioning playing with another team.

The Chronicle reporters, who based the book on a two-year investigation, included an extensive summary on their sources, including court documents, affidavits filed by BALCO investigators, documents written by federal agents, grand jury testimony, audio recordings and interviews with more than 200 people.