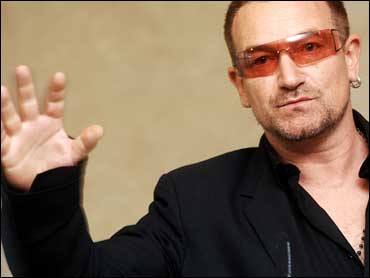 The world's biggest industrial countries are failing to keep up with financial promises they made to Africa, rocker-activist Bono said Tuesday, calling a new progress report "a cold shower" for the Group of Eight.

G-8 members in 2004-2006 contributed less than half the amount needed to make good on promises to double Africa aid to $50 billion by 2010, according to a report released by DATA Debt, AIDS, Trade, Africa an advocacy group founded by Bono, the 47-year-old frontman for Irish band U2.

"The G-8 are sleepwalking into a crisis of credibility. I know the DATA report will feel like a cold shower, but I hope it will wake us all up," he said.

Bono is urging German Chancellor Angela Merkel, who chairs a G-8 summit in Germany next month, to ensure that members contribute what they said they would.

The report shows the G-8 increased aid by $2.3 billion but says they need to increase aid by an additional $3.1 billion to substantially help the people of Africa.

"These statistics are not just numbers on a page," Bono said. "They are people begging for their lives, for two pills a day, a mother begging to immunize her children, a child begging not to become a mother at the age of 12."

The DATA report said aid money that does arrive has an effect. "Every day 1,450 Africans living with AIDS are put on lifesaving drugs," the organization said, and 20 million African children are going to school for the first time, thanks in part to debt cancellations and aid increases.

Still, Bono warns that insufficient increases in aid could reverse progress already made. DATA says the G-8 must contribute $7.4 billion this year alone to reach its goal. If Germany makes good on its promises to help Africa, he said, the other G-8 members will do the same. Britain and Japan have contributed most of the aid increase so far, it said.

"Debt cancellation has been used to hype the figures," he told reporters. "We don't want those one-off payments to provide a smoke screen to actual drops in aid."

European Commission President Jose Manuel Barroso pledged to use his influence to lobby G-8 members to meet aid commitments. "As a European I cannot accept that the great and the richest of the world do not respect the promises to the poorest of the world."