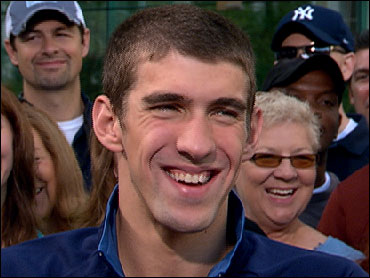 The owner of a bong that Olympic champion Michael Phelps was photographed with tried to sell it on eBay for as much as $100,000 reported WIS News 10, a Columbia, S.C. news station.

On Feb. 2, a British tabloid published a photograph of the swimmer using a bong to smoke marijuana taken at a party in November. Eight people were arrested in connection with the party - seven for drug possession and one for distribution, WIS News 10 reported.

In further fallout from the incident, legions of legalize-marijuana advocates are urging a boycott of Kellogg Co., including all of its popular munchies, for deciding to cut ties with Phelps after the photograph.

The leader of one of the biggest groups, the Marijuana Policy Project, called Kellogg's action "hypocritical and disgusting," and said he'd never seen his membership so angry, with more than 2,300 of them signing an online petition.

"Kellogg's had no problem signing up Phelps when he had a conviction for drunk driving, an illegal act that could actually have killed someone," said Rob Kampia, the group's executive director. "To drop him for choosing to relax with a substance that's safer than beer is an outrage, and it sends a dangerous message to young people."

Also urging a boycott were the National Organization for the Reform of Marijuana Laws, Students for Sensible Drug Policy and the Drug Policy Alliance. They encouraged their members to contact Kellogg to vent their views.

In one sign of the campaign's impact, the Phelps saga took precedence over the tainted peanut butter outbreak in the recorded reply on Kellogg's consumer hot line Tuesday.

"If you would like to share your comments regarding our relationship with Michael Phelps, please press one to speak to a representative," said the recording. "If you're calling about the recent peanut butter recall, please press two now."

From Kellogg's media office, there was no immediate reply to a request for an assessment of the boycott campaign. A Kellogg spokeswoman, Kris Charles, said by e-mail, "Our contract with Michael Phelps was set to expire at the end of February and we made a business decision not to extend that contract."