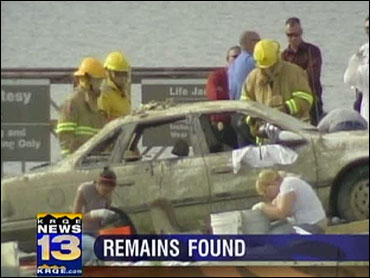 The remains of an adult and three children discovered in a car submerged in a central New Mexico lake may be linked to the 2001 case of a man accused of abducting his three sons, authorities said Friday.

State Police spokesman Lt. Eric Garcia said there is a "strong possibility" that the remains discovered Thursday by state police divers in a Ford Taurus submerged about 15 feet under Cochiti Lake near a boat ramp are linked to Richard Robert Sanchez's disappearance with his sons.

Authorities said that in August 2001, Richard Robert Sanchez, of Albuquerque, took his sons, Richard, 12, Daniel, 9 and 2-year-old Christopher for a weekend custody visit and never returned.

Divers were looking for a pickup truck, whose owner reported it had accidentally rolled into the lake (a popular fishing spot) earlier this week when they came upon the car on Wednesday, said CBS Affiliate KRQE correspondent Jim Winchester.

Garcia said the license plate and vehicle identification number match those of the car Sanchez was driving, and that the "remains that were located in the vehicle and their characteristics are very similar to what occurred on the original day."

A child's car seat was found in the back of the car and shoes of the sizes that the boys would have been wearing also were recovered, Garcia said.

The four sets of remains are from an adult, a younger teen and two children, he said.

"One of them was almost completely deteriorated, which is indicative of a small, small child," Garcia said.

The remains will be sent to the state Office of the Medical Investigator to be identified, Garcia said.

Police cannot say for sure how long the car has been in the water. Winchester reports that there are fish hooks stuck in the frame of the vehicle.

Albuquerque Police Department spokeswoman Officer Nadine Hamby said the Sanchez couple was going through a divorce at the time the boys went missing, but had an agreement under which Richard Sanchez could take the children for a few days at a time.

The boys' mother reported them missing after being unable to contact her husband. He failed to report to work the next Monday, but had asked for that day off, Hamby said.

"I don't believe at anytime that anyone thought that there was going to be harm to the kids," Hamby said. "It was just a parent taking their child."

Sanchez and the children disappeared on the eve an initial trial date for Sanchez, who was facing charges stemming from an unrelated August 2000 kidnapping and rape of a child. Sanchez believed he was to face trial on Aug. 13, 2001, but the trial date had been continued, said Pat Davis, a spokesman with the Bernalillo County District Attorney's Office.

"The circumstances surrounding his disappearance were not normal. The family stated to us that he was facing nine years in jail and he was not going back to jail. All those circumstances led us to believe that he intentionally fled and did so with his children," Davis said.

Sanchez was wanted by the U.S. Marshal's Service for rape, kidnapping and flight to avoid prosecution charges.

Hamby said Sanchez's ex-wife, Susana, has been notified about the submerged car.

He said the car's condition indicated it had been in the lake for at least a year but "there's a strong possibility that this vehicle has been there for eight years."