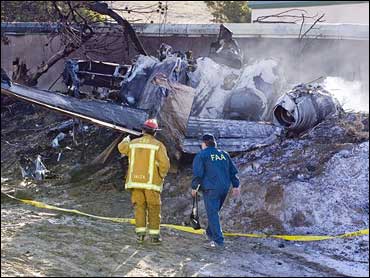 After J.T. Snow hit a home run following a week's absence from the San Francisco Giants, he touched home plate and pointed to the sky.

His thoughts were with his mother.

"The whole time I was rounding the bases, I was thinking of her," Snow said of his mother, who died last week. "Now she can watch me play every night. It was pretty emotional."

Snow homered in his first game back and Barry Bonds added a home run as the Giants won their second straight interleague game with the Oakland Athletics, 4-2 Tuesday night.

"I'll remember that home run like I remember the first one I ever hit," Snow said. "It's something I dreamed about doing, and I was hoping it would happen soon. That one was for my mom. The next one will be for boring old me."

Snow's home run was the Giants' first hit off Tom Candiotti (4-10), who retired the first 12 Giants.

The Giants won both games in Oakland against the A's. Tuesday's game drew a season-high 45,169 fans. These games seem to bring out the best in the Giants, who are a major league best 14-7 in interleague games the past two seasons.

"One thing you can always say about the Giants," Candiotti said. "They are prepared."

The teams move across the bay to San Francisco for another two-game series starting Wednesday night.

Mark Gardner (6-3) fell behind 2-0 after three innings before settling down to hold the A's scoreless on three hits over the next four innings. Robb Nen pitched the ninth for his 23rd save.

Candiotti pitched four perfect innings before Snow finally solved his knuckleball, driving his sixth home run of the season over the right field fence to cut Oakland's 2-0 lead in half.

Chris Jones tripled and scored on a wild pitch by Candiotti later in the fifth to tie the game 2-2. Jones added a sacrifice fly in the ninth to make it 4-2.

Bonds lined a two-out home run off the pole down the right field line, his 16th of the season, giving the Giants a 3-2 lead in the sixth.

Candiotti, who lost his sixth straight start, fell to 3-10 lifetime against the Giants. He allowed three runs and five hits over eight innings, striking out one without a walk.

Oakland put runners at second and third with two out in the seventh, but Bonds made a lunging catch of Ryan Christenson's line drive up the alley in left to end the threat.

Gardner allowed two runs and seven hits over seven innings. He walked one and struck out three.

Matt Stairs singled, went to third on Jason Giambi's double and scored on a sacrifice fly by Mike Blowers for a 1-0 A's lead in the second.

Christenson's second home run of the season in the third put the A's up 2-0.

Notes: A's relief pitcher Aaron Small was designated for assignment and pitcher Jim Dugherty recalled from Class AAA Edmonton prior to the game. ... Gardner pitched into the seventh inning for the eighth straight start. ... Mike Blowers is batting .200 (19 for 95) at the Oakland Coliseum. ... Oakland's Kenny Rogers, who left with back pain after pitching three innings Monday night, reported little pain Tuesday and is now expected to make his next scheduled start Saturday at Seattle. ... The Giants are 11-1 on Tuesdays and 19-2 on Mondays and Tuesdays combined.