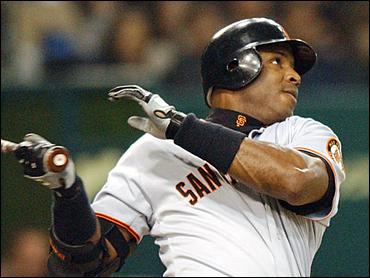 Barry Bonds became the highest-profile athlete to appear before a grand jury focusing on possible tax and drug violations by a California lab that supplied nutritional supplements to Bonds and other sports stars.

The six-time National League MVP entered the grand jury room late Thursday morning accompanied by attorney Mike Rains and left the room nearly 5½ hours later, though it was unclear how long he testified.

"It went fine," Bonds said as he was led by two bodyguards and two federal marshals to a freight elevator that was held for him. He was taken directly to the garage of the federal courthouse, then driven away as a marshal stopped traffic.

Bonds' wife and mother sat in a nearby hallway during most of his appearance. At one point, Bonds — who wore a sports jacket and tie — stuck his head into the hallway and asked, "Is my mother here?"

Benito Santiago, a free agent who spent the past three seasons as Bonds' teammate with the San Francisco Giants, testified for 45 minutes later in the afternoon.

His attorney, David Cornwell, said he fears athletes who appear before the grand jury will be unfairly ostracized.

"My only concern is that there seems to be almost an undercurrent that stigmatizes these guys, which I think is inappropriate," Cornwell said.

Bonds has attributed his muscular development over the years to intense weight training, proper diet and a regimen of nutritional supplements from companies such as the Bay Area Laboratory Co-Operative, or BALCO, that is at the heart of the grand jury probe.

Thursday's appearance gave grand jurors the chance to ask the Giants slugger under oath whether his growth has been entirely natural.

An appearance before the grand jury, or being subpoenaed to testify, does not mean an athlete is a target of the probe.

Two people have been named so far as targets of the grand jury — BALCO founder Victor Conte, and Greg Anderson, Bonds' personal trainer.

Bonds, 39, became a BALCO client just before his record-setting 2001 season, in which he hit 73 homers, and has praised Conte for giving him a personalized nutritional program.

Anderson's home was raided by the Internal Revenue Service and a drug task force Sept. 5, two days after a similar raid at BALCO.

Bonds posed with Conte and Anderson for this past June's issue of Muscle & Fitness magazine and heaped praise on both.

"I visit BALCO every three to six months. They check my blood to make sure my levels are where they should be. Maybe I need to eat more broccoli than I normally do. Maybe my zinc and magnesium intakes need to increase," Bonds told the magazine.

"Victor will call me to make sure I'm taking my supplements, and my trainer Greg will sit near my locker and stare at me if I don't begin working out right away. I have these guys pushing me."

Bonds brought Anderson, a childhood friend, on a major league tour of Japan after the 2002 season, when the trainer met players such as Jason Giambi — who also has been subpoenaed to testify before the grand jury.