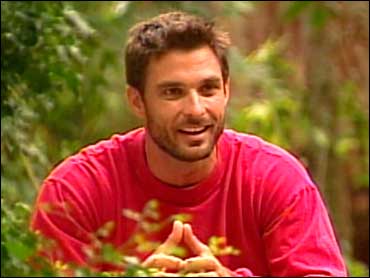 Brady Finta, the FBI agent, was voted out of the "Survivor: Vanuatu" game in Thursday night's episode. The FBI is not allowing Brady to do any post-show press or pubicity for "Survivor," so he did not make the customary morning-after live appearance Friday morning on The Early Show.

However, an interview recorded after Brady was eliminated was shown instead. In it, he predicts a woman will the game's $1 million prize and slams the male tribe's strategy of voting off the strongest competitors first.

Brady's ouster, the fifth of the game, was just the latest in a trend of voting off the male contestants who appear to pose the biggest physical threat. In fact, when finding his group of younger, athletic tribe mates dwindling, model John Kenney questioned the tribe power structure. "Why are we letting fat dudes run the show?" he asked.

"I probably shouldn't have climbed that pole the first day," Brady said in his interview with "Survivor" producers. "Maybe that would have helped. I don't know."

He was referring to the first-episode contestants' welcoming ceremony on the island which included a challenge to climb a greased pole and retrieve a good-luck idol. Brady was the first to attempt it, and he succeeded immediately, winning the idol for his male Lopevi tribe.

Explaining why the interview was taped instead of live, co-anchor Rene Syler said that because of the upcoming counterterrorism assignment, the FBI had asked the 33-year-old Huntington Beach, Calif., resident to withdraw from the spotlight.

"I wasn't ready to lose," Brady said. "I wasn't ready to go home. I felt like I should have done better. I felt like I could have done better. I think some of the things I did kept me from being first or second out of our tribe. Working as much as I did, building the shelter, hunting the papayas, climbing the trees, fishing, all of those things extended it to the 10-day mark."

He expressed some frustration with the older, less physically fit members of his tribe: "It did end up being, at least for the first 10 days, the five guys who would have probably not fared quite as well in individual challenges against the other guys. As it started to grind on and people got weaker, a little bit more tired, some of the people that were not at all concerned about being voted off were pretty obvious about the fact that they were just going to sit there and watch other people work and get the food and fire going and everything else. Because, you know, they had nothing to worry about."

On the other hand, he had praise for the way the female Yasur tribe was playing the game. "In my opinion, a girl is going to win," he said. "The girls, they took the right approach. The guys that are there now started, within the first 20 minutes of the game, thinking, 'If I am alone in an individual challenge against that guy and that guy, which one of those guys is going to beat me?' Well, probably those three, which, in my opinion, was way too premature."

The women's tribe, on the other hand, were working to make sure that the finalists were all girls and then they would sort things out.

In a twist to the game this week, the women's reward, following a memory matching challenge, was 24 hours with an island native who taught them a series of Vanuatu survival skills and pointed out edible plants and roots, including sugarcane.

They went into the immunity challenge well-fed and with boosted tribe morale. The match was close in a tricky, brain-teaser puzzle, but in the end the women won out in the battle of wits.

"I can't help but feel like a bit of a loser," said Finta in his parting testimonial, "But in the back of my mind I'm hoping this was one of those things where they said 'Brady is one of those guys that he makes it to the merge, he's going to kick my a--.'"