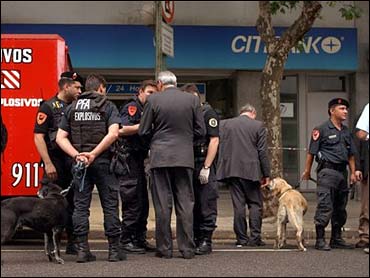 The explosions occurred near ATM machines in branches belonging to Citibank and Banco Galicia, damaging the building's facades, officials said. The blasts occurred before the banks opened.

A 38-year-old security guard was killed at a Citibank branch in downtown Buenos Aires, said Hernan Fernandez, a spokesman for a private ambulance service.

Police also discovered bombs at two other banks that were later detonated, injuring at least one officer, police said.

No group immediately claimed responsibility for the bombings.

Banks remain a flashpoint of public anger following Argentina's 2001-2 economic crisis. Billions of dollars in bank accounts held by Argentines were frozen as the government tried to thwart a run on the banks and prop up a tottering financial system.

Since then, hundreds of thousands of Argentines have filed lawsuits hoping to recover their savings, much of which were forcibly converted from dollars to devalued Argentine pesos.

Citibank is a subsidiary of U.S.-based Citigroup. Banco Galicia, part of Banco de Galicia y Buenos Aires, is based in Argentina and is the country's largest private bank.