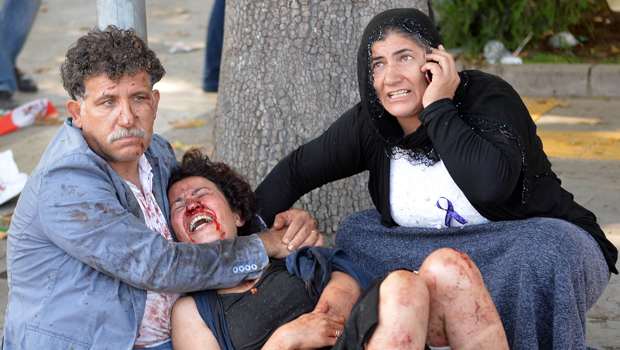 Also taking part were members of the Kurdish Peoples' Democratic Party, the main political party representing Turkey's Kurdish minority, Williams reports. The country's Kurdish minority has been at the center of an upsurge in violence over the past few months.

The rally aimed to call for an end to the renewed violence between Kurdish rebels and Turkish security forces. The peace process between the two groups that started in 2012 broke down because of the recent surge in violence, Williams reports.

There was no immediate claim of responsibility for the deadliest attack in Turkey in years.

Prime Minister Ahmet Davutoglu said there were "strong signs" that the attacks - which struck 50 yards apart - were suicide bombings and suggested that Kurdish rebels or militants with the Islamic State of Iraq and Syria, or ISIS, could be behind them.

At a news conference, he declared a three-day official mourning period for the victims as well as for all those killed in terror attacks since July.

"For some time, we have been receiving intelligence information based from some (Kurdish rebel) and Daesh statements that certain suicide attackers would be sent to Turkey... and that through these attackers chaos would be created in Turkey," Davutoglu told reporters, using the Arabic acronym for ISIS.

"The (Kurdish rebels) or Daesh could emerge (as culprits) of today's terror event," Davutoglu said, promising that those behind the attacks would be caught and punished.

The Turkish government imposed a temporary news blackout covering images that showed the moment of the blasts, gruesome or bloody pictures or "images that create a feeling of panic." A spokesman warned media organizations they could face a "full blackout" if they did not comply.

Many people in Ankara reported being unable to access Twitter and other social media websites after the blasts. It was not clear if authorities had blocked access to the websites, but Turkey often does impose blackouts following attacks.

The attacks Saturday came at a tense time for Turkey, a NATO member that borders war-torn Syria, hosts more refugees than any other nation in the world and is holding a general election on Nov. 1.

Authorities had been on alert after Turkey agreed to take a more active role in the U.S.-led battle against ISIS. Turkey opened up its bases to U.S. aircraft to launch air raids on the extremist group in Syria and carried out a limited number of strikes on the group itself. Russia has also entered the fray on behalf of the Syrian government recently, bombing sites in Syria and reportedly violating Turkish airspace a few times in the past week.

Turkish jets have also carried out numerous deadly airstrikes on Kurdish rebel targets in northern Iraq. Some 150 police and soldiers and hundreds of rebels of the Kurdistan Workers' Party, or PKK, have been killed since July, when the conflict flared anew.

Busloads of activists had traveled to Ankara from other cities to attend Saturday's peace rally. Turkey's government late Saturday raised the death toll in the twin bomb blasts to 95 people killed, 248 wounded. It said 48 of the wounded were in serious condition - and a doctor's group said many of them had burns.

An Associated Press photographer saw several bodies covered with bloodied flags and banners that demonstrators had brought with them for the rally. Police later cordoned off the area.

Television footage from Turkey's Dogan news agency showed a line of protesters near the train station, chanting and performing a traditional dance with their hands locked when a large explosion went off behind them. The video also showed several people later lying injured on the streets or being taken into ambulances.

"There was a massacre in the middle of Ankara," said Lami Ozgen, head of the Confederation of Public Sector Trade Unions, or KESK.

President Recep Tayyip Erdogan condemned Saturday's attacks, which he said targeted the country's unity and peace, and called for solidarity.

"The greatest and most meaningful response to this attack is the solidarity and determination we will show against it," Erdogan said.

The attacks Saturday, which even surpassed an al Qaeda-linked attack in Istanbul in 2003 that killed 60 people, also drew widespread condemnation from Turkey's allies.

"It is an attempt at intimidation and an attempt to spread fear," she said. "I am convinced that the Turkish government and all of Turkish society stands together at this time with a response of unity and democracy to this terror."

NATO Secretary General Jens Stoltenberg said "there can be no justification for such a horrendous attack on people marching for peace... All NATO allies stand united in the fight against the scourge of terrorism."

Small anti-government protests broke out at the scene of the explosions and outside Ankara hospitals as Interior Minister Selami Altinok visited the wounded. Some demonstrators chanted "Murderer Erdogan!"

Critics have accused Erdogan of re-igniting the fighting with the Kurds to seek electoral gains - hoping that the turmoil would rally voters back to the ruling Justice and Development Party, or AKP. Electoral gains by the country's pro-Kurdish party caused the AKP, founded by Erdogan, to lose its parliamentary majority in a June election after a decade of single-party rule.

It was the third attack targeting meetings of Kurdish activists. In July, a suicide bombing blamed on ISIS killed 33 peace activists, including many Kurds, in the town of Suruc near Turkey's border with Syria. Two people were killed in June in a bomb attack at a pro-Kurdish party's election rally.

"This attack resembles and is a continuation of the Diyarbakir and Suruc (attacks)," said Selahattin Demirtas, leader of the Turkey's pro-Kurdish party. "We are faced with a huge massacre."

He held Erdogan and Davutoglu's government responsible for the attack Saturday, saying it was "carried out by the state against the people."

In the aftermath of the attack, Kurdish rebels declared a temporary cease-fire ahead of Turkey's Nov. 1 election.

A Kurdish rebel statement said Saturday the group is halting hostilities to allow the election to proceed safely under "equal and fair" conditions. It said it would not launch attacks but would defend itself.

The government has previously dismissed any possible Kurdish cease-fire plans, saying the rebels must lay down their arms and leave the Turkish territory.