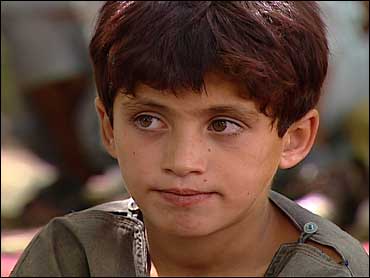 There's been a burst of fighting in Afghanistan in recent weeks. The enemy sent waves of suicide bombers to attack U.S. bases. Allied troops and unarmed humanitarian workers have been ambushed and killed. Now there is controversy about whether an American air strike killed a large number of civilians.

As correspondent Scott Pelley first reported last year, the Afghan government has been demanding an end to air strikes, even though the U.S. military says they're vital to supporting the troops. 60 Minutes wanted to find out what effect the strikes are having on the war, so we traveled to a small Afghan village that was hit by American bombs in March 2007.

Our journey took us through Afghanistan, up the Shomali Plain north of the capital, Kabul. The Taliban are active in the area, so 60 Minutes hired Panjshiri mercenaries to cover our trip. The scene of the air strike is a village in the hills above Kapisa Province.

The 60 Minutes team found the dead buried in a cornfield. It appears there were no enemy combatants. It was four generations of one family, all killed in the air strike: an 85-year-old man, four women, and four children, ranging in age from five years to seven months. One boy survived. The night of the bombing, seven-year-old Mujib happened to be staying with his uncle, Gulam Nabi.

"Some of the bodies were missing a hand or a leg or half a head. We recognized one of them only by the clothes she was wearing," Nabi remembers.

"I saw my mom, my sisters, and my brother and my grandfather were dead. And our house was destroyed," the little boy remembers.

Mujib's father was not there. He's accused of being a local Taliban leader and the U.S. has been searching for him with no luck. The air strike came the night of March 4. An Army press release says it started after enemy forces fired a rocket at a U.S. base above the village. The rocket fell "causing no coalition casualties," in fact, "missing the fire base" altogether. Then U.S. pilots saw two men with AK-47 rifles leaving the scene of the rocket attack and entering a compound in the village.

The fort, which is on a hill, began raining down mortar fire on part of the village -- mortar fire that came down for about an hour. It was nighttime, and even though there were no U.S. forces in contact with the enemy on the ground, a decision was made after the mortars to call in an air strike. U.S. Air Force aircraft dropped two bombs on the neighborhood, each one weighing 2,000 pounds.

The bombs hit their intended targets, but when the smoke cleared there were no men with rifles -- just Mujib's family.

"During the Russian invasion we haven't heard of 10 members of one family being killed by Russians in one incident. But the Americans did that," a villager remarked.

These Afghans, like many others, are trying to decide whether to support the U.S.-backed government. We expected anger, but we didn't expect this.

"You can't be saying that the Soviets were kinder to your people than the Americans have been," Pelley remarks.

"We used to hate the Russians much more than Americans," the villager replied. "But now when we see all this happening, I am telling you Russians behave much better than the Americans."

Really, there's no comparison. The Soviets killed something like a million Afghans over ten years. But it's the kind of thing that Afghans are saying, and here's why: in 2007, 22 air strikes killed more than 320 civilians, according to the humanitarian organization Human Rights Watch.

It leaves Afghan President Hamid Karzai explaining to his people why they're being killed by his allies.

"Why are so many Afghan civilians being killed by U.S. forces?" Pelley asks.

Asked if he is asking the American government to roll back the air strikes, Karzai says, "Absolutely. Oh, yes, in clear words."

Karzai told 60 Minutes he delivered those words, privately, to President George W. Bush last year, but he decided to take the message public in this interview. "And I want to repeat that, alternatives to the use of air force. And I will speak for it again through your media," he says.

"You're demanding that?" Pelley asks.

60 Minutes wanted to understand how these air strikes are planned. It turns out the mission that made Mujib's neighborhood look like an ancient ruin was run through a futuristic-looking, classified control center. We were surprised to get into the facility because it has never been seen on television before. We promised the Air Force we wouldn't reveal classified information, or the Persian Gulf country where the center is located.

Air Force Col. Gary Crowder is deputy director of the Combined Air Operations Center, which runs the air war over both Afghanistan and Iraq.

"You know, I'm curious. How often is an air strike prepared that's called off at the last minute?" Pelley asks.

"Thousands and thousands of times a month," says Crowder. "We look very, very often, we tracked some of the insurgent leaders we will track for days and days on end. And we are prepared to strike them at any moment. But we can never get all of the criteria necessary to meet our rules of engagement."

We learned there are two kinds of targets: deliberate targets, which are analyzed for days and watched for patterns of civilians coming and going, and immediate targets, such as when troops are in combat and need air support. In both cases, civilian casualties are estimated in advance and it's up to the commander on the ground to decide whether the strike is worth the cost.

"We rely on those commanders to make the assessment at the time of what the requirement is. He assesses proportionality. He assesses the validity of the military target," Crowder explains.

Asked what he means by " proportionality," Crowder tells Pelley, "If we know that there is a sniper on a roof and the roof is in the middle of a mosque which is a protected site or in the middle of a very populated area, then dropping a 2,000 pound weapon on that would not be proportional to going after the sniper."

"Two men with AK-47s run into a house. Do you bomb the house?" Pelley asks.

"In some circumstances, we will bomb the house," says Crowder. "It is entirely dependent upon the circumstances on the ground, and the ground commander's assessment of that particular situation."

"There's this macabre kind of calculus that the military goes through on every air strike, where they try to figure out how many dead civilians is dead bad guy worth," says Marc Garlasco, who knows the calculus of civilian casualties as well as anyone.

At the Pentagon, Garlasco was chief of high value targeting at the start of the Iraq war. He told 60 Minutes how many civilians he was allowed to kill around each high-value target -- targets like Saddam Hussein and his leadership.

"Our number was 30. So, for example, Saddam Hussein. If you're gonna kill up to 29 people in a strike against Saddam Hussein, that's not a problem," Garlasco explains. "But once you hit that number 30, we actually had to go to either President Bush, or Secretary of Defense Rumsfeld."

But he says none of the targets on the list were actually killed. Instead, he says, "a couple of hundred civilians at least" were killed.

"The bombs that are dropped are really only as accurate as the intelligence behind them?" Pelley asks Crowder.

"That's true. But we have come a very long way in getting that intelligence to be more accurate," Crowder says. "We will collect human intelligence, signals intelligence, overhead full-motion video, all of that tied together, very often in real time. That gives us a better understanding and a significantly higher confidence that the targets we're engaging are in fact valid military targets."

Of course the Taliban are killing civilians too, targeting them deliberately. By contrast, 60 Minutes watched American airmen calculate how to minimize civilian casualties with the choice of timing, weapon, and direction of attack.

"I don't think people really appreciate the gymnastics that the U.S. military goes through in order to make sure that they're not killing civilians," Garlasco points out.

"If so much care is being taken why are so many civilians getting killed?" Pelley asks.

But why were bombs dropped on Mujib's house? As we said, the Army wouldn't speak to us about it. An Air Force source says that Mujib's house was a Taliban hideout. But through an interpreter, the villagers disputed that, and they said the U.S. should have known better.

"The Americans came here the day before they bombed, they searched the whole house and saw women and children in the house," says Mujib's uncle, Gulam Nabi.

"This is such an important point. Let me be sure I've got this. Who came the day before?" Pelley asks.

"The Americans," a translator explains.

We took their accusation to the military, and an Air Force source confirmed that U.S. troops searched the house the day before. We don't know what those troops may have seen or reported.

Marc Garlasco left the Pentagon in 2003 to become senior military analyst at Human Rights Watch. He has examined this case and he told 60 Minutes that even if Mujib's father was a local Taliban leader, the air strike backfired.

"You have to ask yourself, is a mid-level thug worth nine dead civilians? But it goes beyond that. You're not talking about just losing nine dead civilians. You're also talking about violent protests throughout the country, requesting a democratically elected government be taken down, you then take people who maybe were in a pro-government area, and all of a sudden you're turning them against you, and turning them towards the Taliban," Garlasco says.

"To return just for a moment to the bombing at Kapisa," Pelley addresses President Karzai. "A rocket was fired at a U.S. base there. It missed. No one was hurt. And yet, the response was to drop 4,000 pounds of explosives on that neighborhood."

"That is wrong," the president says.

"They hit what they were aiming at," Pelley points out.

"That is a mistake," Karzai says. "I know that. It may be at times careless. A careless mistake, but not deliberate."

"There is one young boy who is the sole survivor from that house," Pelley tells Karzai. "A seven-year-old boy named Mujib. We asked him what he thought of the Americans and as you might expect, he said, 'I hate them.'"

"That doesn't bode well for the future," Pelley says.

"Yeah, it doesn't," Karzai responds. "That's why I'm so strongly asking for rethink of the use of air force. And this little boy I will call to my office. I will share his pain with him, as do the rest of the Afghan people. And try to get him a future."


Earlier this year, Mujib did travel to meet with President Karzai. In light of last week's air strike, with claims of 90 civilians killed, Karzai now says his government is re-examining its relationship with U.S. and NATO forces.