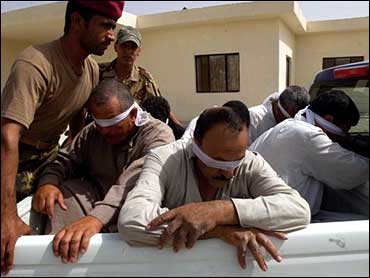 A suicide bomber dressed as a policeman blew himself up Saturday during a morning roll call at the heavily guarded Baghdad headquarters of a feared commando unit, killing at least three people, officials said. Eyewitnesses reported at least five died.

Another suicide car bomber later blew himself up in front of the Slovakian Embassy in southeast Baghdad, injuring four people.

Attacks by suicide bombers and gunmen in Baghdad and south of the capital left at least 23 dead.

Just south of Baghdad, gunmen killed at least 11 Iraqi construction workers and injured another three when they riddled their minibus with bullets as it drove in the so-called Triangle of Death, police said. The attack occurred in Diyara, 30 miles south of Baghdad, and the men worked on construction projects on Iraq and American bases, police added.

Al-Mahamdawi, the police officer, said the attacker was disguised as a policeman and detonated explosives during a roll call for recently graduated commandos at the Wold Brigade headquarters.

"I was inside the headquarters building when the explosion took place," al-Mahamdawi said. "Then I saw five dead bodies lying on the ground plus seven injured people, most of them are policemen."

"There was a group of newly graduated commandos gathered in the yard at the time of the explosion," he added. It was unclear if the bomber was standing among the graduates or was nearby.

The attack may have been motivated by the Sunni struggle for a role in the country's political process. Sunnis, a minority favored by Saddam Hussein, resent the rise to power of the majority Shiite community and the U.S.-allied Kurds.

This is believed to be a major factor in the continuing insurgency in Iraq that has killed at least 934 people since the new Shiite-led government was announced April 28.

Jabr said that an ongoing counterinsurgency campaign to weed out militants in Baghdad had led to 1,318 arrests and claimed it was showing some success in drastically reducing the number of car bomb attacks in the capital.

"Operation Lightning has forced the terrorists to flee outside Baghdad," Jabr told a news conference.

He said that before the campaign, which will enter its third week Sunday, there were an average of 12 car bombings in Baghdad and had now dropped to 0.6 percent a day. He added that more than $6 million was confiscated and that eight foreigners — all Arabs — were among those captured.

He added that eight people had been arrested in connection witha Friday car bombing outside a Baghdad falafel restaurant that killed 10 people, including two children.

Iraqi police also raided an auto mechanic's workshop in the southeastern New Baghdad suburb and captured five men suspected of rigging car bombs, Lt. Col. Ahmed Abood said. It was unclear which attacks the men have allegedly been involved in.

The bodies were found in a canal under a footbridge and one of the slain men was seen handcuffed and wearing civilian clothes, according to footage taken by Associated Press Television News.