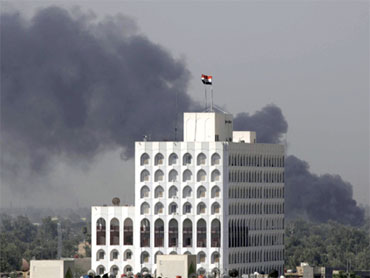 A suicide bomber driving a minibus blew himself up in front of the Baghdad office of a popular Arabic-language satellite news channel early Monday, killing four people, police and hospital officials said.

Majid Hamid, a Baghdad-based correspondent for the Saudi Arabia-owned, Dubai-based Al-Arabiya, said the bomber was able to pass through the first security gate and detonated the bomb in front the channel's office.

The bomber, who was driving a minibus, was apparently waved through the first checkpoint after security guards checked his identification, said Iraqi military spokesman Maj. Gen. Qassim al-Moussawi. He said three guards and a cleaning woman were killed in the blast that left another 10 injured.

"This has the clear fingerprints of al Qaeda," al-Moussawi told the channel.

Al-Arabiya correspondent Tarek Maher said he was in the building when the blast occurred. He said the building sustained heavy damage and the explosion left a massive crater.

Al-Arabiya is among the most popular Arabic news stations, but has been viewed by militants in Iraq as too pro-Western and has been targeted in the past.

Two years ago, the television's Baghdad bureau manager escaped assassination when a bomb was found under the seat of his car as he prepared to leave home for work

In other violence, a bomb loaded with nails and hidden in a pile of garbage exploded in northern town of Beiji, killing three people, hospital officials said.

Dr. Saad Muhsin, who works at the Beiji hospital, said that the explosion wounded five others.

Violence has declined sharply in Iraq. But concerns are mounting that militants are looking to take advantage of the political vacuum resulting from politicians' inability to form a government four months after the March elections as the U.S. draws down its combat forces to 50,000 by the end of August.
By Associated Press Writer Bushra Juhi