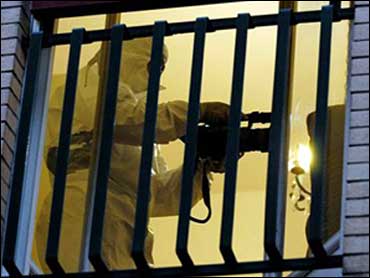 British police were questioning suspects Saturday in hopes of learning who recruited and supported the bombers who struck at London's transit system, and authorities vowed they would not let up in their massive anti-terrorist operation.

Scotland Yard police headquarters appealed to the public to remain vigilant, fearing further terrorist cells could be planning an attack.

In Rome, extradition hearings began at a prison for Osman Hussain, an Ethiopian-born Briton suspected of trying to attack London's Shepherd's Bush subway station July 21. He was arrested Friday after police traced his cell phone calls. His court-appointed lawyer, Antonietta Sonnessa, told The Associated Press that Hussain "probably prefers" to stay in Italy, which means the hearings could stretch over months.

Italy's Interior Minister Giuseppe Pisanu said Saturday that Hussain took a train on July 26 from London's Waterloo station, the terminal for several destinations on the continent. British police were investigating how Hussain managed to slip away five days after the failed attacks, despite a huge manhunt and his photograph being issued to officials at all ports and airports.

London has been on edge since four suicide bombers attacked three subway trains and a bus during rush hour in central London on July 7, killing 52 people. The botched attacks two weeks later, in which the bombs only partially detonated, took no lives but were a stark indication the terror threat was not over.

"The threat remains, and is very real," said Peter Clarke, head of Scotland Yard's anti-terrorist branch on Friday. "We must not be complacent."

The investigation has moved swiftly. On Wednesday, anti-terrorist officers in Birmingham arrested Yasin Hassan Omar, 24, a Somali citizen with British residency, after subduing him with a stun gun. He is suspected of trying to bomb a subway train near Warren Street station.

On Friday, police wearing black ski masks and body armor and armed with machine guns surrounded the Dalgarno Gardens apartment block near Wormwood Scrubs prison in west London. Officers quietly evacuated local residents, as television crews that had already gathered at the scene complied with a police request for a news blackout.

Witnesses said police blasted their way into an apartment with a small explosive device and fired tear gas. Two men emerged onto a balcony, bare chested and with their arms up and were swiftly arrested.

Police said one of the men identified himself as Muktar Said Ibrahim, 27, the man suspected of planting explosives on the No. 26 bus in Hackney, east London, last Thursday. Also known as Muktar Mohammed Said, he came to Britain in 1990 from Eritrea and was granted British citizenship in September 2004.

The second man identified himself as Ramzi Mohammed and is suspected of trying to blow up a subway train at the Oval Tube station. He was captured on security cameras on July 21 running through the station, wearing a "New York" sweat shirt.

The apartment complex is not far from Little Wormwood Scrubs park, where police last week found a dark backpack containing a fifth bomb.

Meanwhile, dozens of officers swooped on the nearby Tavistock Crescent apartment complex, on the edge of the chic Notting Hill neighborhood. Some officers wore gas masks, others carried sniper rifles and took aim from behind parked cars during the raid.

Scotland Yard declined to name the man arrested there, but the British news agency Press Association, citing police officials it did not identify, said his name was Wahbi Mohammed, the brother of the suspected Oval Tube bomber.