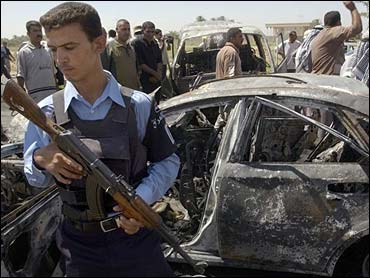 A suicide car bomb killed a Shiite legislator and three others near Baghdad on Tuesday, an attack likely to further fuel ethnic tensions on the one-year anniversary of the transfer of sovereignty to Iraqi authorities.

Separately, more than 1,000 U.S. troops and Iraqi forces launched Operation Sword in a bid to crush insurgents and foreign fighters in western Iraq, the third major offensive in the area in recent weeks.

The military campaigns, however, have not been able to capsize a resilient insurgency that has killed more than 1,350 people — mostly civilians and Iraqi security forces — since Prime Minister Ibrahim al-Jaafari announced his Shiite-dominated government on April 28.

National Assembly legislator Dhari Ali al-Fayadh and his son were killed in the suicide attack while traveling to parliament from their farm in Rashidiya, 20 miles northeast of Baghdad, said parliamentarian Hummam Hammoudi, who heads a committee charged with drafting a new constitution.

Al-Fayadh was a senior sheik from the al-Boamer tribe in the Mahmoudiya area, about 20 miles south of Baghdad and a hotbed of the Sunni-dominated insurgency. Al-Boamer includes both Sunni and Shiite clans.

"Those who killed the sheik are the enemies of the Iraqi people at large," Hammoudi said.

Al-Fayadh, in his late 80s, was the eldest member of the new parliament that was installed about three months ago and he had acted as speaker until one was elected. He was a member of the country's largest Shiite political party, the Supreme Council of the Islamic Revolution in Iraq.

Al-Fayadh was the second Shiite legislator to be killed since the new parliament started work in March. Lamia Abed Khadouri al-Sagri was killed April 27 in eastern Baghdad. She was a member of the Iraqi List party.

The country's Shiites are already on edge following a series of car bombings last week that killed nearly 40 people in predominantly Shiite neighborhoods in Baghdad. With the Sunni Arab-dominated insurgency targeting the Shiite majority, the wave of killings has raised fears of civil war.

The new U.S.-led military campaign is focusing on communities along the Euphrates River between the towns of Hit and Haditha in the volatile Anbar province, said Marine Capt. Jeffrey Pool, a spokesman. The U.S. troops include Marines, soldiers and sailors from Regimental Combat Team 2, which is part of the 2nd Marine Division.

The region, about 125 miles northwest of Baghdad, is a hotbed of insurgent activity. Operation Sword, or Saif in Arabic, comes on the heels of two other offensives — dubbed Operations Spear and Dagger.

Operation Spear was aimed at stemming the flow of foreign fighters over the porous Syrian border in Karabilah, which is near the Iraqi frontier town of Qaim. The U.S. military said nearly 50 insurgents were killed during the five-day operation.

The U.S.-led coalition has carried out other offensive and raids in recent months, detaining hundreds of suspected insurgents. Consequently, the U.S. military said Monday it's expanding its overcrowded prisons across Iraq to hold as many as 16,000 detainees.

The prison population at three military complexes throughout the country — Abu Ghraib, Camp Bucca and Camp Cropper — has nearly doubled from 5,435 in June 2004 to 10,002 now, said Lt. Col. Guy Rudisill, a spokesman for detainee operations in Iraq. Some 400 non-Iraqis are among the inmates, according to the military.

All renovations should be done by February.