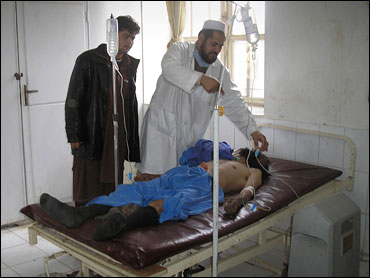 A roadside bomb ripped through a van carrying civilians on a road used by foreign troops in eastern Afghanistan on Wednesday, killing 10 and wounding six, officials said.

In the south, three Australian soldiers were wounded in another blast.

The attacks are a reminder of the dangers facing Afghan and foreign forces as thousands of new U.S. troops roll into the country to try to reverse the Taliban gains of the last three years.

They also came a few days before U.S. President Barack Obama unveils his plan to tackle the deteriorating situation in Afghanistan and neighboring Pakistan, which is battling an Islamic insurgency of its own.

Dozier reports that the White House also hopes to double the size of the Afghan army and police forces. (Click here to read more of the World Watch blog.)

The explosion that killed the civilians happened in Sabari district of the eastern Khost province while the van was on a road also used by foreign and Afghan troops, said Police Chief Abdul Qajum Bakizoy. He blamed Taliban militants for planting the bomb.

The blast killed seven instantly, while three others died later of their wounds in the hospital, said Wazir Pacha, the police spokesman.

The Taliban and other insurgent groups regularly use roadside bombs in their attacks against Afghan and foreign troops, but the majority of the victims in such attacks have been civilian. The number of such incidents rose by 30 percent in 2008, according to NATO.

Sabari district is known for militant activity and clashes between U.S. coalition troops and insurgents.

In the southern Uruzgan province, a blast wounded three Australian soldiers and their interpreter, Australia's Defense Department said in a statement Wednesday.

The Australians were attacked by the Taliban while patrolling alongside Afghan soldiers, the statement said.

"The wounded soldiers and interpreter were given combat first aid by the patrol and moved by helicopter to the Dutch hospital at Tarin Kowt, when the tactical situation allowed," the statement said.

Southern Afghanistan is the center of the Taliban-led insurgency, and the majority of the new troops will be sent there.

The Taliban ruled Afghanistan from 1996 until being ousted from power in the U.S. invasion in late 2001.

Since the U.S. diverted troops and resources to fight the Iraq war, the Taliban have made a violent comeback. Now they lead a bloody-insurgency that threatens President Hamid Karzai's rule and the entire Western project of normalizing this country, which has been embroiled in wars for the last three decades.