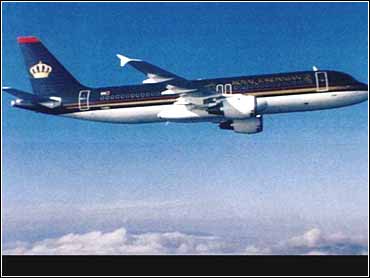 Jordanian security agents aboard a national airliner flying to Damascus foiled a mid-air attempt to hijack the plane Wednesday night, killing a Syrian hijacker, the head of the civil aviation authority said.

The plane managed to return to Amman and land safely.

According to CBS News Correspondent Bob Orr, there are reports Americans were on board. U.S. officials in Washington say they know of no Americans on the flight, but journalists in Jordan say they have talked to 10 to 15 Americans who claim they were on board.

Captain Jihad Rashad told Reuters 15 passengers were wounded when one of the hijackers detonated a grenade inside the Airbus A320 plane 10 minutes after the Royal Jordanian Airlines flight took off from Amman international airport on the 30-minute flight to the Syrian capital.

Eighty-four people were on the flight.

Rashad said there were four hijackers on board, but the state Petra news agency later said it was not clear if the dead hijacker had any accomplices. Officials said three Syrians who were on the plane were being interrogated.

"One of the hijackers, carrying a pistol and a grenade, tried to go into the cockpit 10 minutes into the flight," Rashad said. "When security men on board stopped him, he fired a shot and threw the grenade, which exploded wounding 15 passengers but causing little damage to the aircraft."

Officials said there were two security men on the plane. One of them shot the hijacker in the back after he hurled the grenade, killing him instantly.

He described the wounds of seven of the passengers as moderate and those of the eight others as light.

They said an investigation into the incident was underway and the motive of the attempted hijacking was not yet clear.

"The hijacker freaked out after he threw the grenade and one of the security at the front of the plane gave the signal to his other colleague who was coming from behind who shot the man. The plane immediately was turned back," a security official said.

"There was an explosion and panic," passenger Said Taibi, an Algerian, told Reuters at a hotel near Amman international airport after the plane returned and landed safely.

"The first thing that came to mind was that there was a malfunction in the plane."

He described the hijacker who tried to go into the cockpit as a tall man wearing a black cap with sunglasses on top.

Another passenger, Majed Saba, said he heard the hijacker saying "I want to go in to see the captain, open the door" before he took out the pin of what Saba believed was a stun grenade.

"One feels like he cheated death," said another passenger, Ghada Shamout. "I can't describe the horror of the first few seconds of the incident."

The Kingdom of Jordan is a key player in the Middle East peacprocess. The hijack attempt is the first real crisis faced by its new king, Abdullah, crowned in February following the death of his father, King Hussein.

King Abdullah went to the airport where he got on the plane after it was secured and heard first hand account of the incident, officials said. He later visited the wounded at King Hussein Medical Centre in Amman.

Security incidents at Amman airport have been rare since the days when it was the center of several anti-Israeli hijackings by Palestinian guerrillas in the late 1960s and early 1970s.

Hundreds of Syrians opposed to the regime of the Baath Party in Damascus live in Amman after fleeing in the 1980s.