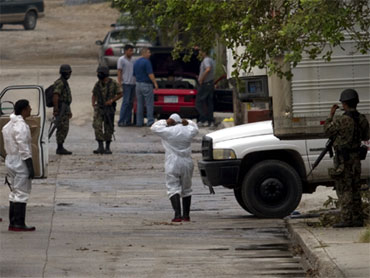 A car exploded early Friday in front of the offices of a major Mexican television station in a northern state where officials are investigating the massacre of 72 Central and South American migrants.

The Televisa network reported that the explosion damaged its building and knocked out its signal for several hours in Ciudad Victoria, the capital of the drug gang-plagued state of Tamaulipas. It said none of its employees was hurt in the explosion, which was felt for several blocks.

Soldiers were blocking access to the building, Televisa said.

The network described the explosion as a car bomb, but city, state and federal officials could not immediately be reached to confirm that. The press office at the Defense Department said it had no information.

If confirmed, it would be the third car bomb in Mexico this year, a new and frightening tactic in the country's escalating drug war.

The first exploded July 5 in the northern border city of Ciudad Juarez, killing a federal police officer and two other people. The second, which caused no injuries, happened just two weeks ago in front of police headquarters in Ciudad Victoria.

Just north of Ciudad Victoria, heavily guarded investigators worked to identify 72 migrants massacred near the U.S. border, while human rights advocates demanded Mexico do more to stop the exploitation and abuse of migrants that they say led to the heinous crime.

Marines are protecting the pink, one-story funeral home where the bodies were taken after being discovered on a ranch Tuesday, bound, blindfolded and slumped against a wall.

Tamaulipas state Assistant Attorney General Jesus de la Garza said Thursday that 15 bodies had been identified: eight from Honduras, four from El Salvador, two from Guatemala and one from Brazil. Diplomats from several of those nations traveled to Mexico to help identify them, and Mexico's National Human Rights Commission sent investigators to monitor the process.

The government's chief security spokesman said the migrants were apparently slain because they refused to help a gang smuggle drugs.

"The information we have at this moment is that it was an attempt at forced recruitment," Alejandro Poire told W radio. "It wasn't a kidnapping with the intent to get money, but the intention was to hold these people, force them to participate in organized crime - with the terrible outcome that we know."

The victims of what could be Mexico's biggest drug-gang massacre were traversing some of the nation's most dangerous territory, trying to reach Texas. The lone survivor said the assassins identified themselves as Zetas, a drug gang that dominates parts of the northern state of Tamaulipas.

In San Fernando, a crumbling colonial town of about 30,000 on Mexico's Gulf coast, most people interviewed by The Associated Press were afraid to give their names.

A funeral home employee said the dead were stored in a refrigerated truck in the parking lot, where flies buzzed above white powder spread over bloodstains.

"This is frightening. It's horrible," said a tortilla stand worker in the crumbling colonial town of about 30,000 on Gulf coast.

"It smells like death. I vomited," his friend added.

Rights advocates warn that migrants are increasingly being kidnapped, killed and exploited by gangs as they travel through Mexico toward the United States, and they say Mexican authorities' indifference is letting the problem escalate.

"We disagree with the government that it is a consequence of battles between criminal groups," said the Rev. Pedro Pantoja, director of the Casa del Migrante in Saltillo in neighboring Coahuila state. "The permissiveness and complicity of the Mexican state with criminals ... is just as much to blame."

The National Human Rights Commission estimated in a report presented last year that nearly 20,000 migrants are kidnapped each year based on the number of reports it received between September 2008 and February 2009 - numbers the federal government disputes.

Mauricio Farah, who coordinated the report, said government corruption is at the heart of migrant abuse in Mexico.

"We are talking about the complicity of several authorities along the migrant route," Farah told MVS Radio on Thursday. "Forty, 80, 100 migrants inside trucks or on the trains cannot pass unnoticed by the authorities ... on the contrary what happens is that they are in collusion with drug gangs."

Commission president Raul Plascencia said Thursday that authorities never responded to its recommendations or demands for greater security for migrants.

"This escalation of the violence ... demands results from the government in finding who is responsible," he said.

In an April report, Amnesty International called the plight of tens of thousands of mainly Central American migrants crossing Mexico for the U.S. a major human rights crisis.

The report said that although the government has made some small improvements, it continues to give the issue low priority, despite the widespread involvement of corrupt police.

Marines discovered the horrific massacre after the survivor, 18-year-old Luis Freddy Lala Pomavilla of Ecuador, staggered wounded to a military checkpoint. He is now recovering from a gunshot to the neck at a hospital.

Lala's family told Ecuador television Thursday that he left his remote Andean town two months ago in hopes of reaching the U.S.

"I told him not to go, but he went," one of his brothers, Luis Alfredo Lala told Ecuavisa television from Lala's home town.

His wife back in Ecuador, Maria Angelica Lala, 17 years old and pregnant, told Teleamazonas her husband paid $15,000 for the smuggler who was supposed to guide him.

That smuggler apparently tried to hide Lala's fate from his family, calling Wednesday to tell her he had reached Los Angeles. That was the day after Mexican marines raided the ranch and found the slain migrants, 14 of them women.

Drug gangs in Mexico often force migrant smugglers to hand over their charges.

If confirmed as a cartel kidnapping, it would be the most extreme case seen so far and the bloodiest massacre since President Felipe Calderon began a crackdown on drug gangs in late 2006. More than 28,000 people have died in drug-related violence since then.

Calderon condemned the massacre as the work of desperate cartels.

They "are resorting to extortion and kidnappings of migrants for their financing and also for recruitment because they are having a hard time obtaining resources and people," he said in a statement Wednesday night.

Kidnappings and attacks on government security patrols are rampant in the highways surrounding San Fernando, where armed men claiming to belong to the Zetas roam freely and the police station is pockmarked with bullet holes from a March shooting. Last month, the bodies of 15 people were dumped in the middle of the highway from San Fernando to Matamoros, a city across the border from Brownsville, Texas.

The region is at the end of a traditional migration route for Central and South Americans who travel up the Gulf coast toward the U.S. border. Violence has soared there this year since the Zetas broke with their former allies, the Gulf cartel, sparking a vicious turf war.

Almost 20 migrants staying at a shelter outside Mexico City turned back to their countries after hearing of the killings this week, said employee Hector Lopez, a Nicaraguan who abandoned his own journey three months ago.

"I wanted to go reach the United States but when I saw what the situation was, what was happening to other migrants, I realized things could get worse for me," he said.

Others at the shelter were stunned by the massacre but undeterred - like 35-year-old Belizean Wilber Cuellar, who said he has been deported six times from the United States and once from Canada, where he worked at a chicken packing plant.