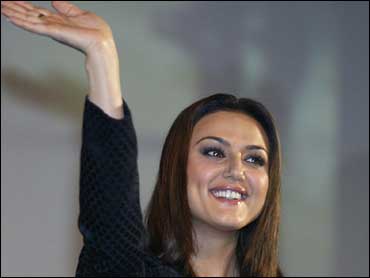 Zinta will accompany producer-director Karan Johar to the festival, she told The Times of India in an interview.

Though not an official entry at the festival, the movie is expected to be shown to select distributors and critics for promotion ahead of its release in India and abroad.

"Karan and I are looking mainly at projecting our film at the festival," Zinta said.

The movie, whose star-studded cast also includes Shah Rukh Khan and Rani Mukherjee, is about relationships and marriages not being as perfect as they appear. Zinta plays an ambitious magazine editor.

She only acted in one film last year, a contrast to the breakneck pace most Bollywood stars put up with.

After she escaped the tsunami disaster in 2004, she stopped signing films and began to look at her life in a different way, Zinta said.

"For almost eight months I stopped working ... Tsunami made me value what I have," Zinta said.

"I wrote down all the things that I have in life to be grateful about. And it was quite a long list," she said, referring to her successful film career and happy personal life.

Zinta was fast asleep in a beach-side villa in Thailand when the killer waves struck in December 2004.

She ran and survived. Friends who had traveled with her, however, did not make it out, something she does not like to talk about.

She is again a busy actress, shooting for three movies that will hit the screen over the next six months or so, Zinta said.