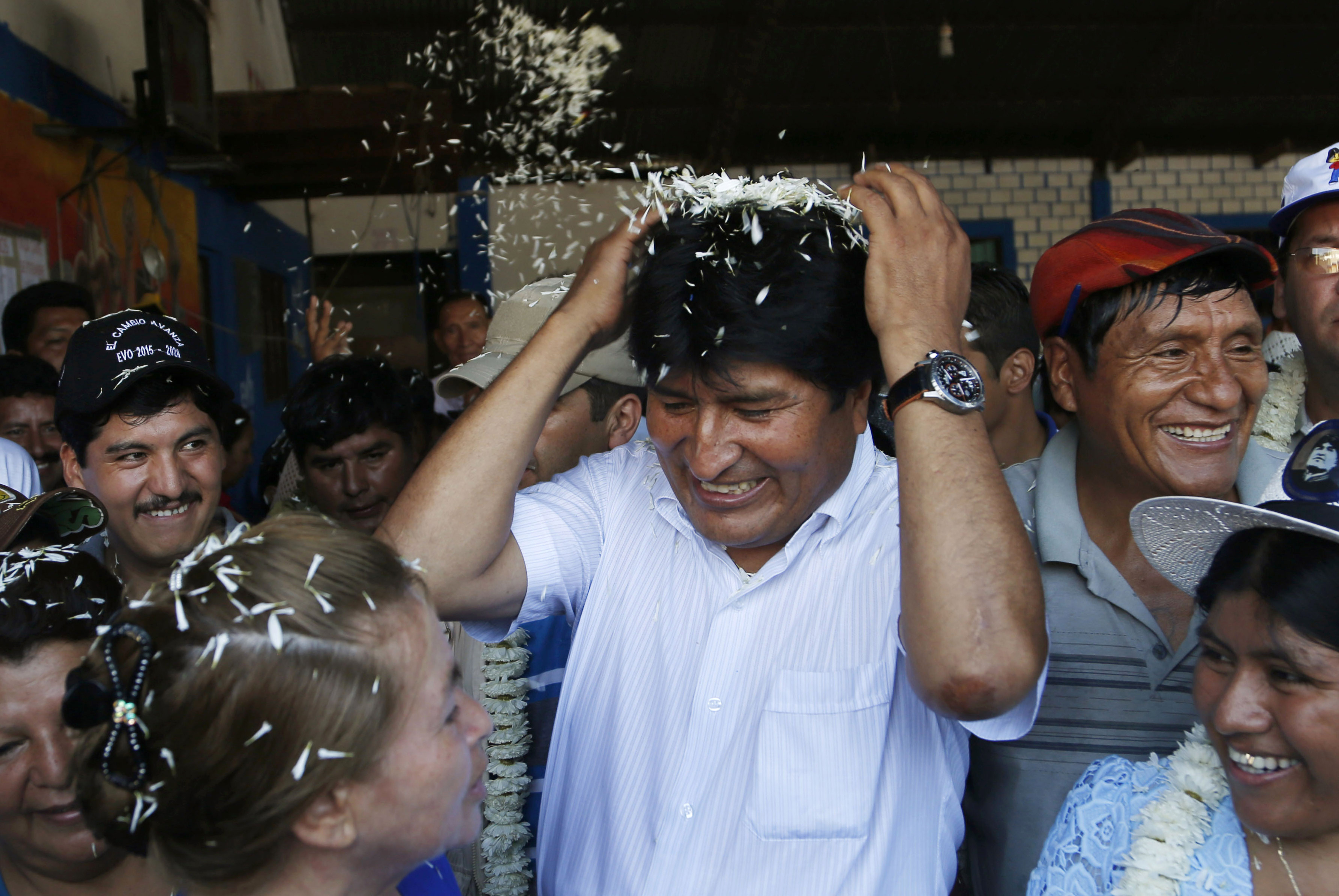 LA PAZ, Bolivia - Evo Morales easily won an unprecedented third term as Bolivia's president Sunday on the strength of the economic and political stability brought by his government, according to an unofficial quick count of the vote.

Morales, a native Aymara from Bolivia's poor, wind-swept Andean plateau, received 59.5 percent of the vote against 25.3 percent for cement magnate Samuel Doria Medina, the top vote-getter among four challengers, according to a quick count of 84 percent of the voting booths by the Ipsos company for ATB television.

If confirmed by partial official results expected after midnight local time Sunday (0400 GMT), it would give Morales an outright victory without the need for a second round of voting.

As the unofficial results were announced, Morales' supporters ran out into the streets to celebrate the win.

While known internationally for his anti-imperialist and socialist rhetoric, the 55-year-old coca growers' union leader is widely popular at home for a pragmatic economic stewardship that spread Bolivia's natural gas and mineral wealth among the masses.

A boom in commodities prices increased export revenues nine-fold and the country has accumulated $15.5 billion in international reserves. Economic growth has averaged 5 percent annually, well above the regional average.

A half a million people have put poverty behind them since Bolivia's first indigenous president first took office in 2006, with per capital gross national income up from $1,000 that year to $2,550 in 2013, according to the World Bank.

"I voted for Evo Morales because he doesn't forget the elderly," said Maria Virginia Velasquez, a 70-year-old widow. Universal old-age pensions - Velasquez gets $36 a month - are among the benefits instituted by Morales that have boosted his popularity.

Morales had sought Sunday to improve on his previous best showing - 64 percent in 2009 - and to maintain a two-thirds control of Bolivia's Senate and assembly. That would let him change the constitution, which restricts presidents to two 5-year terms, so he can run again.

He has not said whether he would seek a fourth term, only that he would "respect the constitution." He did say in a TV interview last week, however, that he didn't believe people over the age of 60 should be president.

A court ruled last year that Morales could run for a third term because his first preceded a constitutional rewrite. All seats are up for grabs in the 36-member Senate and 130-member lower house.

Morales' critics say he spent tens of millions in government money on his campaign, giving him an unfair advantage. And press freedom advocates accuse him of gradually silencing critical media by letting government allies buy them out, a formula also employed by the ruling heirs in Venezuela of the late Hugo Chavez.

"There is no functional opposition, left, right or otherwise," said Jim Shultz, executive director of the left-leaning Democracy Center based in Bolivia and San Francisco.

Morales has capitalized on his everyman image while his Movement Toward Socialism party has consolidated control over state institutions. He long ago crushed and splintered the opposition, nationalized key utilities and renegotiating natural gas contracts to give the government a bigger share of profits.

His image-makers have built a cult of personality around him. Stadiums, markets, schools, state enterprises and even a village bear Morales' name. In the center of the capital, crews are building a second presidential palace, a 20-story center complete with a heliport.

Yet Morales has alienated environmentalists and many former indigenous allies by promoting mining and a planned jungle highway through an indigenous reserve.

And despite Bolivia's economic advancements, it is still among South America's poorest countries. Nearly one in five Bolivians lives on less than a dollar a day.

Many analysts think Bolivia depends too much on natural resources and is especially susceptible to the current easing in commodities demand from China.

"Evo's balancing act will be increasingly tough to maintain," said Michael Shifter, president of the Washington-based Inter-American Dialogue think tank. "Although Evo has proven to be a resourceful and resilient politician, who knows his country well, it would be surprising if the next five years go as swimmingly as the last five."

Morales' dreams of converting its lithium reserves into battery factories have yet to be realized, as are plans to create a major iron foundry.

The underground cocaine economy gets credit for part of the economic boom. Peru's former drug czar, Ricardo Soberon, estimates its annual revenues at $2.3 billion, equal to about 7 percent of gross domestic product.

The United States deems Bolivia uncooperative in the war on drugs and has halted trade preferences and cut all counter-narcotics aid. Morales expelled the U.S. ambassador and Drug Enforcement Administration in 2008, accusing them of inciting the opposition.

Last year he threw out the U.S. Agency for International Development.

Ronald Velasquez, a 38-year-old computer specialist, said he voted for Morales because he didn't trust any of the other candidates. He said he trusts Morales but the president "is surrounded by bad associates."

"He has had a lot of problems in his government with corruption and influence-peddling," Velasquez said.

Macario Chambi, a 54-year-old street vendor, said he would not vote for Morales, whose ruling clique he believes is getting rich off the economic bonanza without instituting the type of reforms that will actually create wealth.

"He thinks we're all sheep, that we don't realize that they want to buy us with cheap sweets."