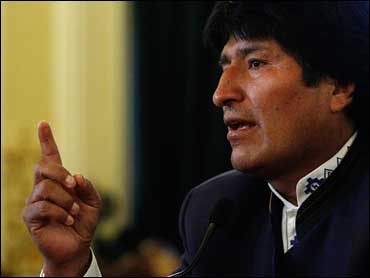 Bolivian President Evo Morales on Saturday suspended operations by the U.S. Drug Enforcement Administration, an agency he has accused of spying and helping to destabilize his government.

Morales announced the indefinite cutoff in a speech in which he said his government has wiped out more than 12,300 acres of illegally planted coca this year. Coca is the raw material for cocaine, but Bolivians use it in its natural form as a traditional tea or chew.

Morales has accused the DEA of working with and even financing his political opposition, as well as fomenting regional anti-government protests and using its drug plane for espionage.

"There were DEA agents who worked to conduct political espionage and to fund criminal groups so they could launch attacks on the lives of authorities, if not the president," Morales said.

The country then expelled the U.S. ambassador, and Washington later put Bolivia on an anti-narcotics blacklist that cuts trade preferences. Bolivian business leaders estimate that loss of the tariff exemptions would cost South America's poorest country as many as 20,000 jobs.

In Washington, U.S. Drug Enforcement Administration spokesman Garrison Courtney said Morales' decision creates "an unfortunate situation," but the agency will find other ways to deal with drug traffic from the South American nation.

"We will find other ways to make sure we keep abreast of the drug-trafficking situation through there," Courtney told The Associated Press.