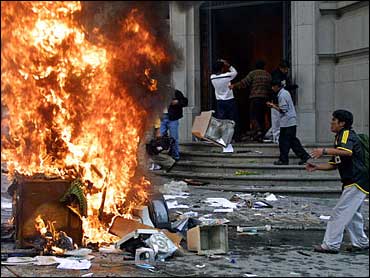 "I plead with all Bolivians to put an end to the violence and to begin honest negotiations," Sanchez de Lozada said. "I ask one more thing from our father above — God save Bolivia."

The death toll rose steadily as the violence continued. Officials late Wednesday night put the death toll in the clashes at 17 with more than 100 injuries.

As the president withdrew all troops from the historic center, protesters set fire to seven government buildings that burned throughout the night as the city's firefighters abandoned their posts and joined the police in the protests.

Protests then turned to looting. Before thousands of cheering onlookers, protesters tossed computers and books from the windows of the government buildings.

A large cheer came as protesters eased a large oak desk out a fifth-story window, and then turned to screams of panic as it landed squarely on a man walking below.

Several hundred demonstrators later attacked the brick and stone headquarters of the president's party, burning the three-story building and destroying a minibus in its garage.

Not far away, inmates set fire to the city's largest jail but firefighters arrived on scene and began extinguishing the flames. There were no immediate reports of injuries.

With no police or military presence, the city plunged into chaos. Ambulances screamed through the city, carrying the injured to hospitals, which pleaded for blood donations. Tired nurses and doctors created a human chain to keep grieving family members from forcing their way into the city's emergency rooms, surgery wards and morgue.

"I've been a doctor here for 30 years and I've never seen such a bloody day," said Eduardo Chavez, director of the capital's main public hospital. Chavez said five of the dead were police officers who died from gunshot wounds.

There were no immediate details on what caused the deaths of the other victims nor of how many of the injured were civilians, police or government troops. At least one 27-year-old man who was shot in the eye by soldiers said he was a volunteer firefighter who was only helping an injured police officer into an ambulance.

The mutiny began Tuesday night when officers in four precincts refused to begin patrols and demanded a 40 percent pay increase.

Officers in the capital are paid the equivalent of about $105 per month, a salary that would have been eroded by proposed income tax increases ranging from 7 percent to 13 percent.

By morning, nearly all police in La Paz and the surrounding area had left their posts despite talks with government officials to avert the strike.

"The citizens here are full of fear," said Fernando Solis, a businessman who was trapped by the protests inside the Paris Hotel in the city's historic center.

Labor unions, business interests and others came out against the tax increases, but it was the police revolt that appeared to spark the violent street clashes with government troops.

Police officers, dressed in green fatigues, seized the foreign ministry, firing tear gas in support of the demonstrators who laid siege to the presidential palace across the square.

All shops were closed within at least 12 blocks of the historic center as smoke from tear gas and burning tires, wood and other debris filled the air.

Television reports said human rights representatives were attempting to mediate between the police and the government.

"We're living a total chaos," said Sonia Rocha, a restaurant owner. "The government should really have thought before announcing these new taxes. We're just too poor to pay them."