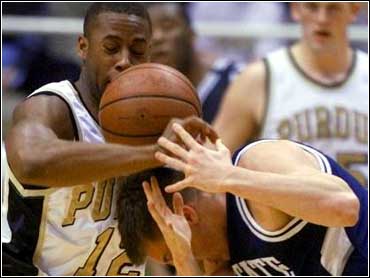 Purdue's seniors played their final game at Mackey Arena, departing with a victory and a loud message from their fans to "Beat IU."

The five seniors helped Purdue compile a 70-28 record in their last three seasons. The latest victory came Sunday, an 88-71 decision over Penn State which moved the Boilermakers into first place in the Big Ten.

"We knew we had to come out here and take care of business," Robinson said of Purdue's eighth consecutive conference victory its longest streak since the 1995-96 team won 11 straight. "This was our last game in Mackey Arena ever, so that had something to do with it too."

Purdue (21-7, 12-3) took a half-game lead over two-time defending champion Michigan State with the victory. The Boilermakers can clinch a share of the regular-season title Tuesday night with a win at Indiana.

The Hoosiers helped Purdue's cause Saturday with an 81-79 overtime triumph over Michigan State.

"We have put together a run that has put us in contention for a (conference) winner," Robinson said. "We need to keep playing hard and get good production off the bench."

Penn State (13-12, 5-9) led only after the game's first basket and Purdue moved ahead to stay 3-2 on Rodney Smith's three-point play. Two consecutive baskets by Robinson later capped an eight-point run which put the Boilermakers up 24-13.

Joe Crispin scored 22 points for Penn State and moved into 14th place on the school's career scoring list with 1,152. He also had six of Penn State's turnovers.

"You always have turnovrs that they force, but a lot of times there are unforced errors," Crispin said. "They definitely did a good job of helping each other out and playing some really good defense."

Brian Cardinal and Carson Cunningham each had 12 for Purdue, reserve Greg McQuay had 11 and Jaraan Cornell scored 10.

"They are as deep as a Michigan State or any of the other teams that are in the top (of the Big Ten)," Penn State coach Jerry Dunn said. "They are very efficient. The guys come off of the bench and provide a lot of energy and productivity."

"The last two games we have gotten absolutely nothing from our bench," Dunn said.

"I was mostly delighted for the seniors," Purdue coach Gene Keady said. "We still have a great opportunity to do something special. They're right on track to stay with the championship run."

"Coach Keady has made this a home for us," Cardinal said. "The last thing we wanted to do is leave."

Titus Ivory had 19 for Penn State. Jarrett Stephens had a double-double for the Nittany Lions with 13 points and 10 rebounds.

A 48-41 deficit was as close as Penn State came in the second half. Purdue responded with a 8-3 run, capped by Carson Cunningham's 3-pointer.

Penn State managed to shoot 60 percent in the second half and 53 percent for the game. But it had 14 turnovers in the first half and 11 more in the final period.