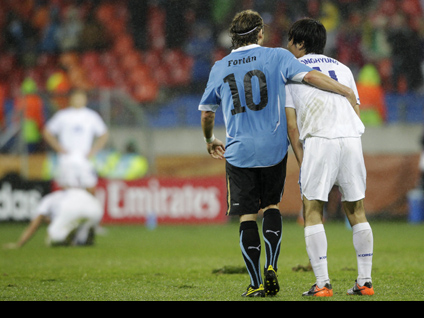 The president of country singer Chely Wright's fan club resigned after the Nashville Tennessean learned of a scheme in which fan club members posed as soldiers or members of military families to pressure radio stations into playing her pro-military single, "The Bumper of My S.U.V."

The newspaper said Wright, 34, had denied any knowledge of the operation in which 17 fan club members called or e-mailed radio stations in an effort to get them to play the song.

"I am shocked, saddened and deeply upset by this unethical behavior," the singer said in a statement.

The Tennessean said Wright described fan club president Chuck Walter as an "unpaid volunteer who acted without my knowledge or direction."

But in an interview a day earlier, the newspaper said, Wright called Walter "my best friend. We talk all the time, about everything."

The song says a woman in a minivan gives Wright the finger because there is a U.S. Marines sticker on the bumper of her SUV. Here's a sample of the lyrics:

Does she think she knows what I stand for
Or the things that I believe
Just by looking at a sticker for the US Marines
On The Bumper Of My SUV?

The Tennessean said a member of the fan club, Stephanie Hoffpauir, 31, had blown the whistle on the operation by contacting the newspaper.

"The whole military thing, it was just wrong. She's not stepping on other artists, she's stepping on troops," Hoffpauir told the newspaper. "You can play aggressive, you can play tough, but when you out and out cheat, that's when you cross the line to being unethical."

Wright was named the top new female vocalist by the Academy of Country Music in 1995. Her most popular song was 1999 hit, "Single White Female."