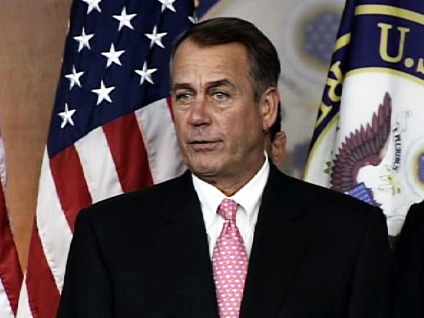 CBS Evening News anchor Scott Pelley sat down with Speaker of the House John Boehner in his office at the Capitol on Monday.

With a brutal partisan fight over the debt ceiling drawing to an apparent close, Boehner said he understands why so many Americans are angry with what's happening in Washington.

The following is a transcript of that interview:

Boehner: We've got divided government in Washington. We've got big issues confronting us. We have a very open process and society. And as a result, we have healthy debates about how to move forward. This has certainly been a long, healthy debate.

Pelley: Give us a little bit of insight. How did the grand bargain fail? What was the breaking point? How did you tell the president you were walking away?

Boehner: It really boiled down to two issues. President was insisting on more taxes. President never got serious about the kind of spending cuts that were necessary in order to get America back on a sound fiscal footing.

Pelley: You don't think he negotiated in good faith?

Pelley: What did you say to each other?

Boehner: I told the president I'm not going there. I can't do that.

Pelley: If this super committee that you talk about recommends raising revenue, can you support that?

Boehner: We'll see what it does. But I'm confident their focus will be on reducing expenditures coming out of Washington.

Boehner: I think that would be a stretch. It doesn't seem likely to me that that would be recommended, much less supported, but I've been surprised before.

Pelley: You were unable to get your own caucus behind your bill a few days ago. Do you intend to remain Speaker of the House?

Boehner: I do. When you look at this final agreement that we came to with the white House, I got 98 percent of what I wanted. I'm pretty happy.

Pelley: Folks at home have been watching the acrimony, name calling, finger pointing. And I wonder whether the Congress has lost something, an ability to talk to each other, to settle down and make agreements?

Boehner: Well, there's the public noise and then there's the private discussion. Some of the most liberal members of Congress are great friends of mind. But the American people don't see the cooperation that exists off camera that really are the glue that holds this place together.

Pelley: Are you saying it's not as bad as it looks?

Boehner: It's not as bad as it looks.