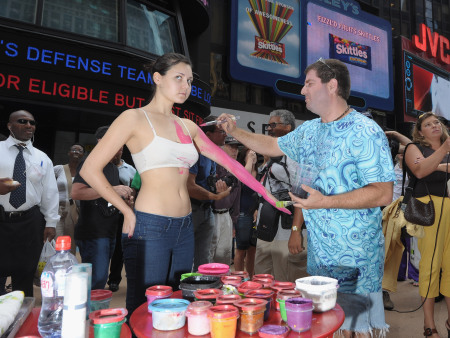 Andy Golub got arrested two years ago for painting nude models in the "center of the universe," and on Wednesday afternoon he was back for a repeat performance.

According to CBS New York, Golub, of Nyack, N.Y., painted the bodies of nude models - male and female - Wednesday afternoon at 46th Street and Broadway.

"I don't like, so much think, like, I want to get noticed, as much as I want to, you know, make art," Golub told the station.

"Aren't you naked on a daily basis?" one model said. "It's nothing you haven't seen before."

Still, she seemed disappointed at the response.

"I expected more people to be a little more shocked," she told CBS New York.

The station says that in 2011, Golub was charged with public lewdness for painting the body of a naked woman in broad daylight in Times Square. The charges were later dismissed after a judge ruled that Golub must wait until sundown to cover the fully nude models in paint.

According to CBS New York, the city says nudity is allowed if it is part of a "play, exhibition, show or entertainment" and Golub is allowed to paint naked models during the day if he "provides reasonable notice of the date, time, and location of his project," citing the news webite DNAinfo.

The artist said it's "fun" to paint nude models in public because "the energy of people...makes it like a whole interactive environment all about connecting with people and art."