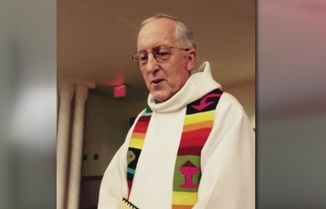 MIAMI -- The body of Florida priest Rev. Rene Wayne Robert, who disappeared last week, has been found in Georgia.

St. Johns County Sheriff David Shoar confirmed during a Monday night news conference that Robert's remains had been found, and that "it was obvious that he was the victim of homicidal violence."

An emotional Shoar called Robert a dear friend and described the investigation as the most intense of his career.

"I just really wish we had better news tonight," he said.

Robert was found in Waynesboro -- 300 miles from where he disappeared in St. Augustine, Florida -- after a man arrested while driving the priest's car led police there, Shoar said at a news conference.

Shoar said he expected Murray would be charged with first-degree murder and kidnapping.

The sheriff said motive was unclear at this point but the Franciscan priest had tried to help Murray, who the sheriff characterized as a "career criminal," after he was recently released from jail.

Investigators think Robert was killed April 10, the last night he was seen. A cause of death has yet to be determined.

Robert's body was to be transported to a crime lab in Atlanta. The body was found four miles off Highway 56 around 7:30 p.m. Monday in Waynesboro, Georgia.

Aiken County Sheriff's spokesman Eric Abdullah wrote in an statement that deputies and U.S. marshals responded to Murray's last known location Wednesday afternoon. As they approached the 2012 blue Toyota Corolla with Florida license plates, Murray drove away and crashed into a tree, then fled on foot, Abdullah wrote. Bloodhounds and a helicopter tracked Murray down and he was arrested, according to the statement.

Murray was extradited to Florida and booked into the St. Johns County Jail late Friday night. Over the weekend, a large scale search for Father Rene was conducted on the Westside of Jacksonville, WJAX reported.

During the investigation, SJSO investigators "developed a rapport" with Murray, who led them to "several locations involved in this case to include where a body was found" on Monday, according to a release from SJSO.

Shoar said authorities are convinced the homicide happened in Georgia, so the charges will come from that jurisdiction.