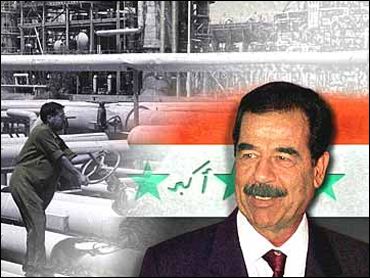 Navy divers retrieved a body Tuesday from the wreckage of a sunken cargo ship in the northern Arabian Gulf, a Navy spokesman said.

Two U.S. sailors — part of a team searching for smuggled Iraqi oil — and three Iraqi crew had been missing after the sinking. With the retrieval of the body Tuesday, all were presumed dead. The body was not immediately identified.

The Samra, believed to be Panamanian flagged, sank in international waters some 80 miles southeast of Kuwait's Al-Ahmadi port at about 4:45 a.m. on Sunday.

A team of sailors had boarded the ship shortly beforehand as it was believed to be smuggling Iraqi oil in violation of U.N. sanctions.

Lt. Melissa Schuermann, spokeswoman for the U.S. Naval Forces Central Command in Bahrain, said Monday that Navy officials did not know if the sailors were aware of the vessel's unseaworthiness before boarding it.

The Navy rescued six U.S. sailors and 10 Iraqi crew on Sunday and recovered the body of one Iraqi sailor.

Two U.S. sailors and three Iraqi crew were presumed dead Tuesday as divers from the navy's auxiliary ship, USNS Catawba, recovered a body from the wreckage.

"We have switched the search and rescue operation to a search and retrieve effort after finding a body, the Bahrain-based 5th Fleet spokesman said. "The body has yet to be identified, but missing sailors and the Iraqi crew are now presumed dead."

The U.S. Navy said the tanker was carrying an estimated 1,900 tons of Iraqi oil. It was boarded as part of efforts to stop smugglers of Iraqi oil.

The U.S. sailors had boarded the tanker from the USS Peterson, a destroyer whose home port is Norfolk, Virginia.