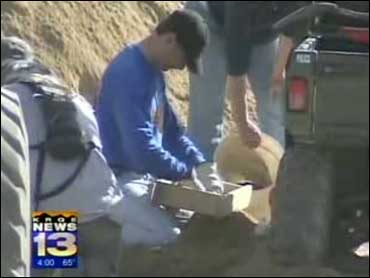 Police said Friday that the remains of two more people have been found during the month-long excavation at a construction site on Albuquerque's West Mesa, bringing the total to 13, including a fetus.

CBS affiliate KRQE correspondent Michael Herzenberg reports that the bones, including a fetus found in its mother, have all been dug up from an area recently razed for a housing development.

Only two sets of remains have been identified.

Authorities say 22-year-old Michelle Gina Valdez and 28-year-old Victoria Chavez of Albuquerque both suffered from drug addiction and worked as prostitutes when they were reported missing in 2004. Linking both women now gives investigators a solid lead to follow, they said.

"We understand these two victims, at some point in time, their lives crossed paths by having contact with the same individual or individuals," said Albuquerque Police Department Chief Ray Schultz.

Police say they suspect the remains were buried by one person but aren't limiting their investigation to one suspect. They also have not released a cause of death for any of the bodies, and are hesitant to say if any were murdered.

The mesa site was found three weeks ago, when a woman walking her dog found the first human bone.

Investigators have said they have a list of about two dozen women, many involved in prostitution, who disappeared several years ago. They have asked
family members to submit medical and dental records that might help identify the remains.

(KRQUE)
Dan Valdez (left), the father of Michelle, reacted to the news that his daughter had finally been found.

"It gets you, it's just like somebody putting their hand into your heart and squeezing you. It gets you."

For the past four years Valdez has been waiting for his daughter to come home. Last night he learned his daughter is one of the people buried on the west mesa. She was pregnant with his third grandchild.

"My heart dropped to my ankles," he told KRQE. "She was my daughter and didn't deserve to be buried in the desert."

Valdez had filed a missing persons report in February 2005, months after he last saw her.

He told KRQE he wants his daughter to be remembered as a good person and a loving mother regardless of her past.

"She was a wonderful kid," he said. "Everybody liked her and loved her. She was a fun person to be with, always smiling joking. Those were the good things I'll remember."

He also knows one day he'll see her again.

"She's in heaven," he said. "Yes, I was hoping she was alive until proven otherwise. I had faith in God he was going to keep her safe and bring her home one day. Well, He's brought her home."