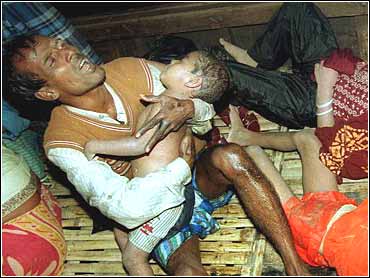 Dozens of decomposing bodies have washed ashore in the past two days after a ferry collision on a fog-shrouded river, now known to have killed at least 176 people, police said Tuesday.

More than 70 people were still missing and presumed dead after Friday's collision between a double-deck ship carrying 400 passengers and another passenger ferry on the Meghna River, said Rafiqul Islam, a police officer supervising the search operation.

Forty-six bodies were recovered on Tuesday floating nearly 3 miles from the from accident site after being swept downstream by swift currents. Police had recovered 46 bodies from the same area on Monday.

"We have been overwhelmed with the recovery of the bodies, which are coming up like dead fish in a poisoned river," Islam said.

All the dead were from the larger ferry, which broke in two and sank in 30 feet of water after the head-on collision 40 miles southeast of Dhaka, the capital. The smaller boat was not damaged.

Many passengers were returning home to the Madaripur region of southern Bangladesh after celebrating the Islamic holiday Eid al-Fitr in Dhaka. Several families were wiped out or decimated.

Khokan Khalifa, a 40-year-old tailor, survived the accident, but his wife, mother, two sons and three brothers were missing and presumed dead.

"What shall I live for?" cried Khalifa, who rushed to a hospital where newly recovered bodies were brought Tuesday, hoping to identify his relatives. He was unable to because of the state of the bodies.

"I can't recognize any of my missing relatives," Khalifa told reporters.